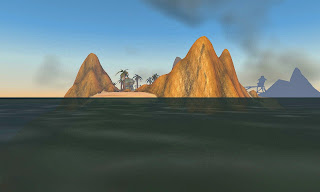 Way before the Cataclysm came and changed the world of Azeroth, there was a little island that was unknown by many. It sat just off the coast of Tanaris and was pretty difficult to get to. Back then you couldn't fly around Azeroth, so you had to use other clever means to get there.

Here is an old map of Tanaris. It's crazy how much the world has changed. This was back before Uldum was a zone. I remember the first time I visited the area. It was just a broken down door with these huge (possibly elite?) Sandstone Golem's patrolling around the area. The islands weren't listed on the map, but if you stood on Land's End Beach, you could easily see them.

Anyway, the islands served no purpose other than if you were on the Scepter of the Sands quest. There was a lonely Naga woman named Meridith the Mermaiden who would give you a quest called Love Song for Narain. Upon completion she would buff you with Siren's Song which let you get to the isles the proper way to continue on your AQ quest chain (Draconic for Dummies).

I was such a young mage at the time, only level 70, and I really had no means of getting there. I was not on the quest, but I wanted to visit so bad since I first eyed up the islands. After doing some fishing dailies for Old Man Barlo, I realised that the Elixir of Water Walking I was getting from him would serve me well. I ended up barely getting to the island by using those elixirs and blink. 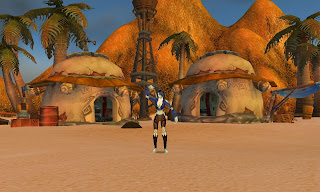 It was a nice little spot. It looked like it used to be home of a Goblin fishing village that was since then abandoned... maybe because of pirates? Maybe they moved to Gadgetzan? 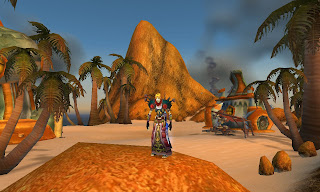 Other that fishing or taking some screenshots, there was really nothing else for me to do there. It just felt really great as another thing to cross off my list of places to see. Sadly, the islands aren't in the game anymore... nor the Naga woman, or even the AQ quest. I would have loved to go back with the ease of flying in Azeroth and explore it again. Hopefully Blizzard adds more islands in later expansions; if you look at old maps of the South Seas, you never know what we shall find in those oceans!