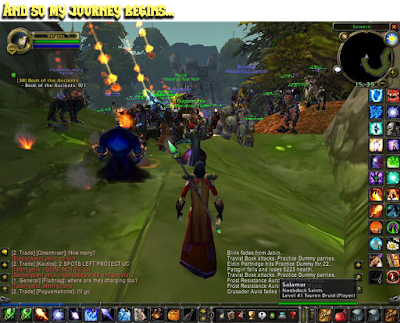 THE BEGINNING
First and foremost let me say that I probably would have never been introduced to this game if it weren't for some people I worked with, my boyfriend, and his friends actually taking the step to signup and play.

I always thought the idea of paying a monthly fee to play a game was stupid. Little did I know, I was about to be hooked. A boy I worked with played WoW religiously. He was the one who got my boyfriend and a few of his friends to start playing. I believe my boyfriend rolled a dwarf warrior on some server he picked at random. Finally he settled in on Skywall with the rest of his friends on the wonderful Horde side.

I never liked the orcs, they always seemed way too ugly for me. I was impressed by the trolls. One day at his house, he let me make a character. She was a troll priest. I ran around the barrens and did a few quests. I may have gotten her past level 5, but I cannot remember. I had fun. I cannot remember how long after that it took me to start playing. I remember I upgraded my dial-up to dsl; yes, I was still living in those dark times. I wasn't paying for my internet then. I installed the disks that my boyfriend had, and used a free trial. I thought long and hard about what I wanted to be, and I decided I would make an undead mage even though I did still like the trolls. The hardest part for creating a character is the naming process. After countless tries I decided to let Blizzard randomly generate a name for me. Velgana was born on May 5, 2007.

The world was intense and new. The starting area was different, and I loved it. I'm sure I went about on my merry questing way killing ghouls, bats, and collecting mushrooms. I remember the first time I stepped into Undercity. I was so confused. For some reason I always remember lots of world PvP going on. I never participated for fear of death. I was so low that I wouldn't have a chance. I do remember my friends who were much higher than me killing Alliance at the front gate of Undercity. My world was so small. I was so comfortable questing in the low zone and selling stuff at my quiet city; then Chrisoos took me to Kalimdor. I was so impressed by everyone in Orgrimmar. They looked so good in their high level armor. Vel always looked like a skittle. I have screenshots to prove it. I loved hanging out with Chrisoos, Daveoos, and my love Pigletoos in Durator. It was only when they left me that I could never find my way back to the city or get back to Eastern Kingdoms to quest.

I remember the first dungeon I ran was Razor Fen Downs. It was with a random group of lowbies. After we killed the first boss, the plate chest dropped and I need rolled on it. I was just so excited to have seen my first blue item. I had no clue if I could use it or not. Oh my goodness I was such a noob. If it weren't for Pigletoos and his buddies, my dungeon experience would have been a really lonely one. I was so impressed when they would take me to Scarlet Monastery and kill everything so fast. When I became a much higher level, I actually ran with a few PUGs and didn't always rely on them to do things for me.

It must have been about My level 40's or 50's that I bought the Burning Crusade. It had been out for a while, and I believe my boyfriend and friend's were almost level 70. By that time I had gotten my best friend and her brother to start playing. In comes Velgana's two friend's Lexana and Pendooka. We never quested much together, but we did join our first guild together. It was a small leveling guild called Epic. I made a lot of great friends there, and we all ran a few instances together. We mostly loved talking and joking around. I stayed in there well into my level 70. Velgana worked on maxing out her professions and making her beautiful Spellfire set. Pigletoos and Chrisoos were already in different raiding guilds. I was jealous at the fact that Pig got to see all these cool bosses and fights. I was missing a big part of the game, and a huge chunk of my heart since he did spend countless hours raiding instead of visiting me. It wasn't long after that, that I left my safe little Epic nest to venture out into the world of raiding Karazhan.

To see my stories and a few photos from each expansion, click the links below:
• Burning Crusades
• Wrath of the Lich King
• Cataclysm
• Mists of Pandaria

Email ThisBlogThis!Share to TwitterShare to FacebookShare to Pinterest
Home