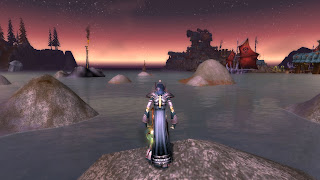 I stood on a rock in the middle of the Bay of Storms. I knew I wasn't crazy, it used to be here. There once was an island I used to frequent quite a bit. I'd fish, it had a cave that housed a turtle named Scalebeard, and an out of the way Demon Hunter who called himself Loramus Thalipedes. I always asked about why is was out in the middle of Azshara, but he never told me much. He'd watch me fish, I'd ask questions about his weapons and blindfold. He told me he had magical powers; he said he could see demons and could sense things about me that most couldn't. He carved his own eyes out. I was always intrigued by Demon Hunters - I made comments about maybe one day seeing the world as he saw it. He told me it was more of a curse than a gift.

After many years of adventuring, I found battles with many Demon Hunters, but I never forgot my "friend". Then the Cataclysm came and changed everything. The island was no longer there. Where had Loramus gone? I decided to find him and maybe see if I could learn anything from him now that am a more seasoned mage. I didn't know where to begin, so I poured through a few books spitting out last known locations of a few Demon Hunters in Ashara. My search took me to Duskwood first.

Rumor was the ghost of a Demon Hunter named Telarius Voidstrider resided deep under the Maw of the Void. I managed to find him, but when I asked of his fellow brother, he looked at me and said, "You are not of the dark path! You do not belong here, Undead. The shadows will consume you. You are not prepared to face the void." 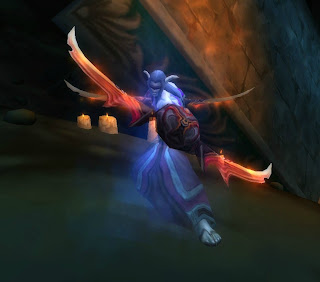 That's really all I needed to hear, and after re evaluating my situation, I promptly left. I didn't want to be fighting a Demon Hunter in a dark underwater cavern.

My next stop took me deep within Felwood. I met with a Demon Hunter named Feronas Sindweller. He told me that Loramus was killed in Blasted Lands while hunting a demon named Razelikh; his body torn apart and scattered across the land. However, he was lucky because an adventurer was able to gather the parts to make him whole again. 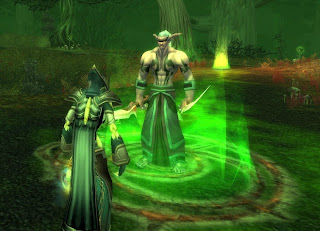 Finally my searching paid off, and I made my way to the Blasted Lands as fast as I could. It wasn't hard to find him. I just asked around the Sunveil Excursion until someone answered me. 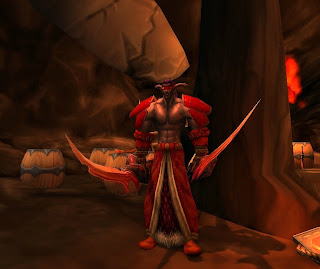 I found him, to the back of a cave. He was in hiding and I didn't blame him. I didn't have to say a word, he knew why I had came all this way to find him again. I wanted to see the world through his eyes. I would never become a Demon Hunter... I was undead. While not the same that they hunted, I was still looked down upon. He handed me a potion and a blindfold. He told me to drink, "This potion, Velgana, will grant you temporary blindness and a glimpse of the terrors I see. After you take it, place the blindfold around your eyes." I took the potion without hesitation and did as he asked. Before I knew it, the world changed right before me. 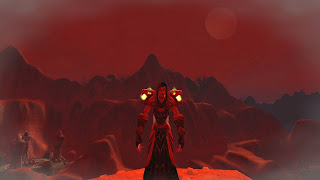 It didn't last long, but I imagine it hurt just as bad as if my eyes were cut out. I could smell the demons; I could smell the rot on myself and around me. I felt sick and sorry all at the same time. I looked upon the Blasted Lands for a while. It was unlike anything I had ever seen. I could actually see the demons around and almost beyond the Dark Portal - I could sense them! Before I knew it, I was back in the cave and everything was back to normal. I looked at Loramus in a different light than before. He put his head down and placed his hand on my shoulder. After a brief pause, I removed my blindfold, looked at him, then simply left. No words were exchanged, but we both knew that would be the last time we would see one another. 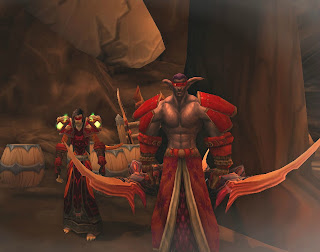 I honestly think what brought us together in the beginning was a lot more than just me fishing. I think it was the fact of just having someone else around who viewed the world a bit differently than others.


Note: The potion used was Four Senses Brew (which has nothing to do with Demon Hunters). Also, this was written just for fun. Simply read and enjoy!