So in my last post, many preparations and decisions were being made before Legion launched. I managed to clean up the remainder of my alts inventories and even managed to begin collecting cloth dungeon items on Vel. I'm starting with vanilla dungeons, and I'm very happy to announce that I've gotten quite a few out of the way. This is something I hope I can continue to work on as I can find the time. So what else have I been doing? Ah yes, enjoying the heartbreaking scenarios that is the start to Legion. Now if you haven't played yet and don't want spoilers, please stop reading here as I'm not putting anything under a cut - You've been warned.

As I logged in that Tuesday I decided to change up the way I do things. I logged onto my Alliance character first and experienced the Broken Shore scenario from their point of view. I knew what was coming, but I didn't know how. I teared up and felt anger toward the Horde. I felt sadness for the loss of such a great King and heartbreak over Anduin having to take on his father's role and Genn having to deal with the loss of yet another close to him. Then I logged over and did it on the Horde side and saw the second point of view. It wasn't until it was all over that I was filled with anger because I did not expect Vol'jin to die. I honestly thought that he was going to fake his death and work undercover. Sadly that was not the case, and to make things worse, he appointed Sylvanas as Warchief. I can sit here and talk about why I don't think she's a good choice, but I won't. I'm just hoping Blizzard uses this as some story line to get Varimathras back in the picture. Expect a speculation blog post about that in the future...

Then we have invasions. After I pretty much geared out my mains and collected all the weapons I could (minus the dagger; no rogue), I put my focus on my alts. I had a few stragglers left over that I made recently or just never got around to leveling. This included a second warlock, which is Melathor's twin, a dwarf shaman, and a brand new gnome hunter. When it was added that characters level 10+ could join in the event, I took advantage. The XP gain was huge, and on the first day I leveled up my alts quite a bit. Sadly the experience gain was nerfed significantly to where it was taking me longer to level. I didn't mind though. I'd often put my characters at a site and /afk while I did housework during the day. This weekend a tagging bug was fixed and our lovely XP was flowing once again. I managed to level my warlock to 100, my shaman to 80, and my hunter to 70. No bad at all. I plan to continue to do these until they are gone. 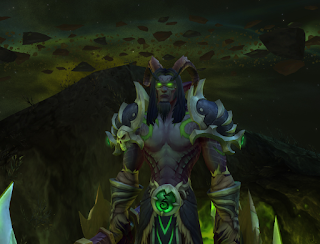 I also took the plunge and pre-ordered Legion a few days after the invasions began. I now have a lovely demon hunter, and my first night elf as well. I also boosted my paladin like I had stated in a previous blog post. I'm not going to lie though, it was hard. To be honest, I felt a lot better when it was all over and I did a few invasions on him. I forgot how fun paladins are, and possibly my favorite melee class. I do look forward into doing current content with him. It's been way too long. So what's next? Now we wait. In less than ten days, Legion will be launching. I'll be getting some real life stuff done so I can focus on the beginning of the expansion. I hope that Legion give me more inspiration to blog, but I can already feel it in my bones. This one is going to be good!