The new patch is here, and as with all patches, things have changed. That overwhelming sense of having to get everything done right now is racing through many people's minds - as well as mine. As I was sorting through the banks/void storage of one of my alts, it hit me; I don't have to stress over any of this. I have more than enough time to sort out transmog, gather up some of the new items, and learn my new rotations well before the Legion invasions hit the servers. So day one was basically cleaning out banks and void storage, and boy am I happy with all of my new found bag space. Of course there were still some special items I kept on certain characters, but most stuff went out the door. I was sad to realize that the Scarlet set wasn't all changed to plate like I was previously led to believe. So that put a little damper into my paladin plans. I guess I will have to wait and see if it's a bug or until the ensemble is actually available at the Darkmoon Faire. I also realized I have a cloak collecting problem as my 16 pages of them shows. Day two was re-doing talents on all my characters and reading up on their new class rotations and changes. Thank goodness for Icy Veins because I would be a lost mess! The next few days were spent leveling alts and running old raids (these weapon illusions are calling!).

What else? Ah yes, the doomsayers in the cities. These people always like to pop up when times are about to get tough. This time they give out pamphlets, and collecting all twelve will give the user the achievement "It All Makes Sense Now". I decided to casually talk to them every time I was in the city, which has been a lot more than usual these past few days. However, waiting the twenty minutes to get another pamphlet wasn't fast enough for some people. It was funny, and a bit horrifying considering the content of these pamphlets, that people were dropping their characters to their death to get rid of the twenty minute de-buff. I managed to get my achievement this weekend without repeatedly harming my character. 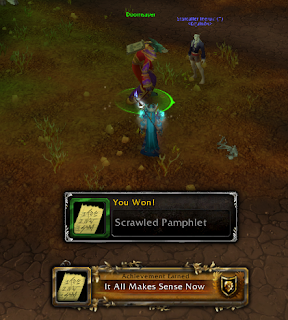 I also can't decide if I want to jump on the gnome hunter bandwagon or just make another mage. I have an alt gnome saved on Scarlet Crusade (US) for Running of the Gnomes, but I never got a chance to participate yet. The gnome itch is strong right now, and I think an engineer hunter with all the mechanical pets would be a good addition to my alt family. However, I also think having a fire mage in the Time Lord's Regalia would also be awesome. The good thing is nothing is set in stone yet so I still have time to decide what I want to do. 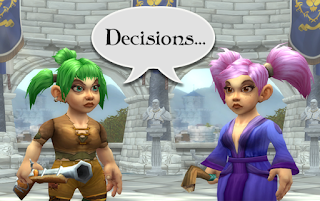 After all of that, and a very long Warlords expansion, I guess it's safe to say that this blog has now crossed over into the Legion expansion. As boring as Warlords actually was, I prefer to look back on the better things about it: The questing experience was amazing, and I liked how they gave you faster options such as potions, objectives, and treasures when leveling up alts. The cut scenes between zones were amazing, and I'm looking forward to seeing more of them in Legion. Let's not forget our "gold farms"... I mean garrisons. Seriously, I will miss logging in to get thousands of gold for virtually doing nothing. Ah, good times. For now, let us leave Warlords behind and wash out that sour taste it left. Bring on Legion!