Dark Whispers and the Banshee Queen

If you have spent any time in a major city during the Legion pre-event, chances are you were effected with the debuff that caused you to turn into a dreadlord, or maybe you saw another person turn into one instead. A player who knows what they are doing can cause quite an amount of chaos in the city until they are defeated. This isn't all that far fetched as dreadlords (or Nathrezim) are commonly known to be masters of manipulation and can use these abilities to weasel their way into positions of power without anyone knowing. Before I get started I wanted to say that this post isn't going to be about the "Jaina is a dreadlord" theory. In my opinion, that's just stupid. Instead this is going to be my theory on why Sylvanas was put into her new role as Warchief of the Horde.

Up ahead contains Legion spoilers, so if you haven't don't the Broken Shore scenario, turn back now. As with all post like this, read it with your tin-foil hat on as this is meant to be fun. Let's begin! 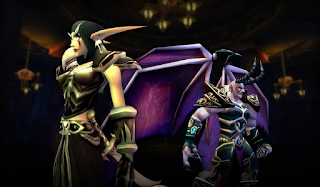 We will talk more about Lady Sylvanas and her new status a bit later. Right now, let's travel back to Wrath of the Lich King and earlier expansions. If you happened to visit the Banshee Queen around that time, by her side was a dreadlord named Varimathras. He and the Dark Lady had quite a strained history. He first helped her by giving her information vital to escaping the grasp of Arthas and the Lich King. Shortly after this he offered her to join the Legion, which she refused, making her an enemy. She brought her army against his forces, but before his defeat he pleaded with her to spare him since he had information on the locations of other demons. She agreed to this and together they hunted down and killed his brethren. Standing by her side as Majordomo, he eventually helped her to build up her Forsaken empire. Of course there is much more to his backstory, and you can read all about it over on WoWpedia.

Things went on seemingly normal until the Battle for Undercity. Varimathras had gotten not only Professor Putress, but many other members of the Royal Apothecary Society on his side. He had not only remained loyal to the Legion all those years, but he did it right under the Banshee Queen's nose. His plans were to overthrow her leadership on Undercity and take control of the Forsaken. During this now removed quest, each faction took different paths with the Alliance defeating Putress and the Horde "defeating" Varimathras. You can view the Alliance side and the Horde side on Youtube. It gives a pretty good idea to what went on during these quests. 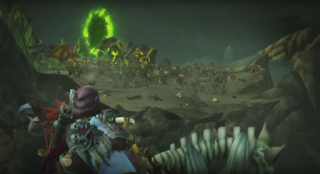 Fast forward to current times and the Broken Shore scenario. During the Horde's final stand against Gul'dan and the Legion, they are overrun and Warchief is gravely injured. Vol'jin tells Lady Sylvanas "do not let the Horde die this day". It is here she is forced to make the decision to pull back the Horde forces. This is possibly a decision she did not want to make as she knew it would cause more faction tension. Her apprehension can be seen over her face as their boats leave the shore. Once back in the city, the Horde get a bonus cinematic - the death of the Warchief. It is here, in front of each faction leader that Vol'jin states to the Banshee Queen: "The spirits have granted me clarity - a vision. They whisper a name many will not understand, but you must step out of the shadows and lead. You must be Warchief."

At this moment not only are the other leaders, namely Baine, possibly the player (depending on how you view Sylvanas), and also Sylvanas herself shocked by this revelation. While everyone was celebrating the victory of this fan favorite picked as Warchief, my mind couldn't help but going back to Varimathras and all they had been though. We now know that demons can only be killed in the Twisting Nether, so anyone defeated elsewhere can always come back. Many previously defeated demons can even be seen on the Alliance side of the Broken Shore scenario. Once again, dreadlords throughout the years have used their powers to sway different things to go their way. To name a few, Balnazzar disguising himself to infiltrate the Scarlet Crusade, Mal'ganis guiding Arthas to become the next Lich King, and Sathrovarr possessing Kalecgos. With this information, I don't think Vol'jin was hearing whispers of the spirts. Instead, he was hearing the dark whispers of a dreadlord.

So if this is true, what would Varimathras gain out of having Sylvanas in such a high position? Well if you were Alliance, you don't know what happened on the Horde side of the Broken Shore. To you it would have looked like the Horde retreated, leaving you to die. This raises faction tension once again. If you're busy fighting each other, things can start to slip in through the cracks. Secondly, it's uncertain how the other leaders of the Horde feel toward the Banshee Queen. Her manner of continuing on the Forsaken race had always been a questionable practice. Perhaps some will not agree on the way she choses to do things. Tension with the opposite faction is one thing, but when your own people turn on you, then you have trouble. Lastly we know she will be heading to the Broken Isle, perhaps Varimathras will use this opportunity to overthrow her as he once tried many years ago. The odds would be in his favor this time. So I ask again, what would Varimathras gain? Let's just say that revenge is a dish best served cold. 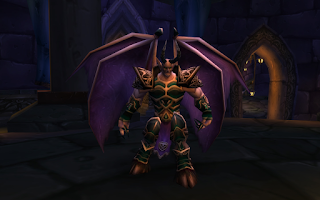