I can't believe I've had this blog for almost the entire time I've been playing WoW and haven't went into detail about what got me hooked on my favorite things to collect in game - mini pets! This post came to mind as I was preparing to clean up my WarcraftPet's profile. I figured it would be better to put this here since I have more room to talk about it. 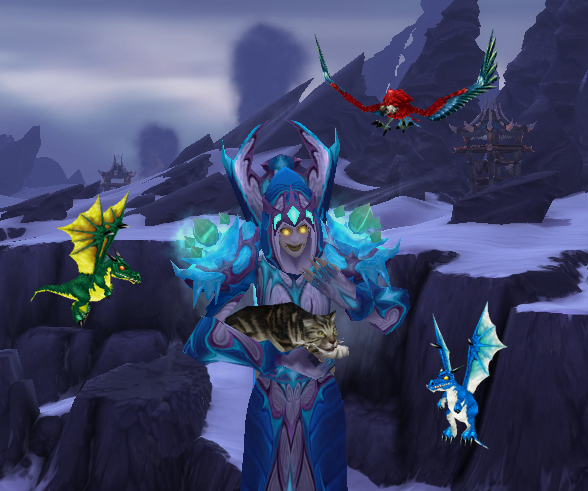 I often like to ask people, what was the first mini pet you remember getting? I'm pretty positive mine were the Senegal and Cockatiel off of Narkk in Booty Bay. I clearly remember keeping one on me and placing the other in my bank. Not long after that I remember running Deadmines and getting the Green Wing Macaw to drop from there. I felt like a pirate!

I went on with my WoW life, still not completely hooked on collecting. I remember when the Azure Whelpling was released in patch 2.3 (The Zul'Aman patch). It was pretty highly sought after on my server at least. I had a friend who wanted it really bad. I used to fish in Azshara probably more than I'd like to admit, so I passed the blue dragonkins that dropped it quite often. Well one day when I was passing, I killed one, and it dropped. I was shocked and quite excited. This began my unhealthy obsession with collecting mini pets!

It's around this time that I made friends with another collector. He's now my oldest Warcraft friend, and we still talk to this day. I'm not sure what got him to start collecting, but we were always talking about who got what pet most recently, and what pet we were going for next. I clearly remember us both hunting for the Black Tabby off of the Ambermill Spellscribe. I'm not sure who got their's first, but I remember we both eventually got it. I also remember by the end of Burning Crusade we both had no more room in our banks/bags for anymore pets since they weren't a learned spell yet!

I also remember some of my more frustrating times. I used to kill so many pirates for the Hyacinth Macaw, but I never was lucky enough to get it to drop. I also used to spend hours upon hours in the Swamp of Sorrows farming for the Emerald Whelp. It was so bad that I remember a guildie asking me why in the world was I always there, hah. I have no regrets on any of this or the amount of gold I've probably spent on getting some of the rarer ones. The only regret I have is that I didn't start playing the game early enough to get a vanilla collectors edition!

I've also met so many wonderful people through the WarcraftPets community, and just in general from collecting pets. They start conversations, and I love it when I can gift unsuspecting people with a pet they don't have. I can't wait to see what's in store for mini pets, and as always, I'm looking forward to expanding my collection!