In my previous post about the WoW soundtracks, I wanted to touch more on the Lament of the Highborne and the quest line to go along with it. If you didn't level up a Blood Elf or quested in the Ghostlands zone to get Loremaster, then chances are you never completed this. It's out of the way and acquired by getting an item to drop off of some mobs. Sorry everyone... this one is Horde only!

The Windrunner family lived at Windrunner Spire in Quel'Thalas. The eldest sister, Alleria was given a necklace by her parents which contained three stones: an emerald, a ruby, and a sapphire. She was sent on a mission with her rangers to chase the orcs beyond the Dark Portal, however, before she left, she had her necklace melted down into three pieces. She kept the emerald piece for herself. The two remaining pieces were given to her Lieutenant Verana to deliver to Sylvanas and Vereesa. Verana decided to wait for Alleria's return so she could gift the pendants to her sisters herself; However, Alleria has never returned. Eventually Verana did give the pendant to Sylvanas and I'm sure we can assume that Vereesa also got hers. During the Scourge invasion of Quel'Thalas, Sylvanas lost her necklace; She saw her death here and also sealed her future to become our Banshee Queen. The sisters were forever broken apart. 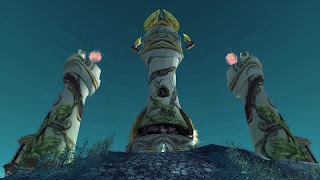 While adventuring in Ghostlands, you stumble into the Windrunner Spire. Fearing for your life, you kill the first banshee you see, and she drops an item called The Lady's Necklace. 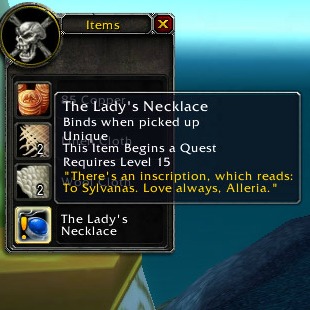 Upon further inspection of the piece of jewelry, you realize that it once belonged to the Dark Lady in Undercity. You decide to take it over to High Executioner Maven in Tranquillien who may know something more about this odd piece of jewelry. 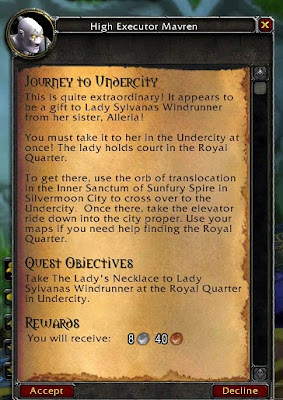 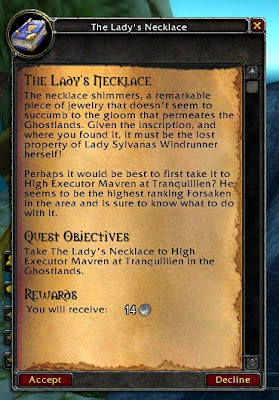 Maven takes a look at the necklace and tells you to deliver it to Sylvanas in Undercity. You're not really fond of the place, but you head there anyway. Upon arriving in the Dark Lady's Sanctum, you aren't greeted happily. Sylvanas does seem a bit taken back by the delivery.

"Lady Sylvanas Windrunner looks down at the discarded necklace. In her sadness, the lady incants a glamour, which beckons forth Highborne spirits. The chamber resonates with their ancient song about the Sin'dorei..." 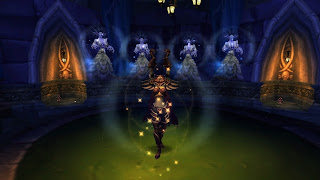 I can't help but feel that deep inside her heart, she still has some love for her sisters. I'd love to maybe see them in a happy reunion someday even though I really don't think it would happen as Vereesa doesn't seem to keep on befriending any Horde since the death of her husband, Ronin.

As you turn to leave the Queen's chambers, Ambassador Sunsorrow motions you towards him. He gives you an item and says:
"Just a small songbook that I thought you might like to have. It contains the lyrics to a song known as the Lament of the Highborne; the one that Lady Sylvanas glamoured from the air." 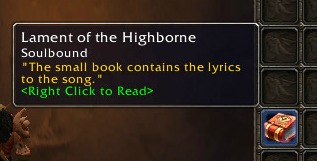 You can either keep the book or discard it. I decided to keep in on this character that I used for these screenshots since I no longer have it on my main. It's a nice little memento that to remind you of the quest, and it also has the lyrics to the song. So, if you're bored and find yourself wandering around the Ghostlands, this is a nice little quest to do that takes less than 5 minutes of your time. 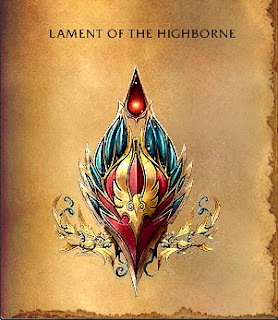 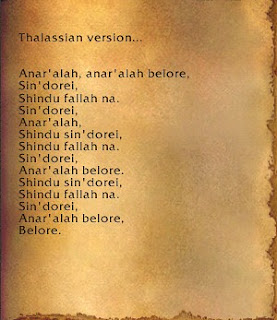 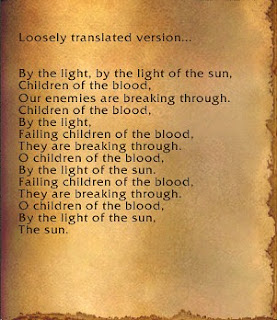 Added Bonus: This is a picture of me doing the quest during The Burning Crusades on Velgana. This is the old Sylvanas model singing the Lament of the Highborne with her Banshees. 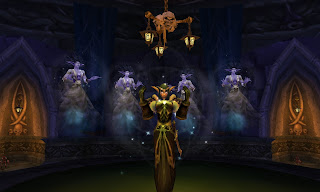