So, I hope 5.3 is treating everyone well. I have to say that the most epic part so far was the Horde quest line (I have no idea what you Ally are doing) that took us to Sen'jin village to side with Vol'jin, Thrall, and Chen to overthrow Garrosh and basically take back Orgrimmar. I've never wanted to fight so hard to get the Horde back to being a proud race - not a race hell bent on destruction!

I was also super excited about the mini pets coming in this patch. So far, Vel has only collected two of the raiding with leashes pets - Menagerie Custodian and Netherspace Abyssal. I'm not worried about buying the on the auction house... I'll get them when I get them. On the other hand, I was extremely worried about getting the Unborn Val'kyr. I had been keeping up with the thread on the Warcraft Pets forum about the PTR and was worried that no one could find the "trigger" to make them spawn. Now with the patch being out a day, I think it's pretty clear that they spawn whenever they feel like it, but I think in certain places. While many users seem to have found success in Sholazar Basin and Zul'drak, I ended up catching mine in Crystalsong Forest. Below are the tips I used to catching myself an Unborn Val'kry.

As any collector, NPC Scan is my friend. One of the first things I did after the servers went live was add the NPC ID to my addon. Now, some people said that they were experiencing it going off when they would open their pet tab in WoW, but I never had an issue with it. However, on my filtered options I only show "collected" pets so that could be why. Try that if you're having an issue.

Tuesday, I spent my time flying everywhere. I must have scanned the entire continent of Northrend and saw nothing. I began to get frustrated, but I read a bit more on the forums and decided to camp a certain spots. I put Vel in Zul'drak and an alt in Sholazar Basin. I would log on and off every so often to check, but I saw nothing. I don't think this method is really that great because of her rarity mixed with CRZ and all the people looking for her.

Wednesday, I decided I would stay in certain areas. I flew Vel around Howling Fjord most of the day, because it seemed to be quiet and I always love the music in that area. I had no luck there either. I moved her to Zul'drak and stayed there for about 45 minutes of seeing nothing but little bunnies hopping around. Vel was bored, so we decided to go run Kara, TK, and SSC on alts to pass the time. After we were done, I decided I would fly back to Zul'drak to do a quick flyover then head to Grizzly Hills to camp for a while. I never made it there because I found her in Crystalsong Forest! 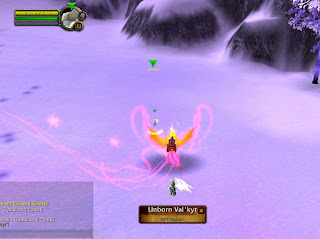 Sorry for the extremely crappy screenshot, but I snapped it as fast as possible before engaging in a pet battle. Luckily I was there because seconds after I was in the battle, someone flew over me. Hopefully they don't have to wait long to get their Val'kyr if that's what they were looking for. 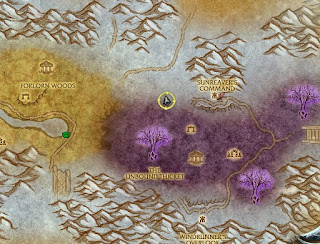 Of course she was poor quality, but I used a battle-stone to upgrade her. She is now fully leveled up too! I'm glad to have her join my pet battle arsenal! So maybe you can't go looking for the Val'kyr... maybe she comes looking for you? Who knows! I hope 5.3 is being good to all of you. Happy hunting!!!