It's been a long time since I posted here. I didn't forget, but life, illness, and other things have gotten in the way. Patch 7.2 has been out for a long time now, and it still feels like I'm just starting to actually touch the content. I guess that's the downfall of having new content so fast; you feel like you're never really caught up. That's not always a bad thing though, but I'm not here to complain. I'm here to talk a little more about was something that I didn't originally care about when it was mentioned: The Deaths of Chromie.

I guess it was a mistake on my part, but I wasn't really sure what it would be. I don't like to read too much into data-mined things either, because when it comes down to the patches, I like to be surprised. I originally thought it was going to be almost like a challenge where waves of enemies come to you to fight off. If Chromie died, you failed. What I got instead was a much better experience that left me wanting more single player content like this from Blizzard. I know Blizzard tapped into this by adding Pet Battle dungeons, which I don't love. I will admit that Deadmines is a lot better than Wailing Caverns. I hope they improve with more additions. 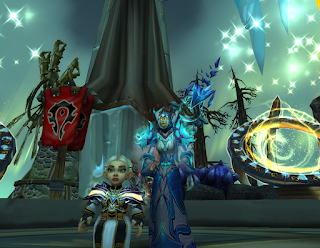 Back to Chromie. In the scenario, you're trying to figure out who is trying to, well, kill her. The whole thing first takes you to the different dragon shrines in Dragonsblight followed by different portals to different areas in Azeroth. In each area, you will working toward different objectives. Though some objectives can be unclear, once you know what to do, the majority are fairly easy. I am currently stuck on the Battle for Andorhal section. Though it's a bit frustrating having to try over and over, I know the satisfaction of getting it done will be worth it in the end!

As I said before, I really love this new trend of solo player content that I can jump into whenever I have the time. I do think players enjoy the flexibility of being able to jump into something they can work towards by themselves (such as the mage tower challenges) whenever they feel like it. I also like how this scenario offers some rewards such as a title, transmog, and mini pets. These little treats keep you wanting to continue so you can collect everything. So the question I want to leave you with is, would you enjoy more single player content in Warcraft? And if you haven't tried the Deaths of Chromie yet, go now!