I'm as much of a Diablo fan as I am a WoW fan. While I never played the original or D2, I've logged countless of hours into D3 and still do with each season. I guess you could imagine my excitement when I heard that the 20th anniversary celebration of Diablo would also be coming to World of Warcraft along with some exclusive items. As with all timed holidays, I get a little nervous because I want to be able to collect everything, and I wasn't sure how bad the drops would be. It turns out they weren't too bad at all. 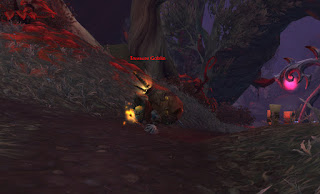 After poking my nose around for a bit more information, I learned that the best place to consistently find treasure goblins was the Dalaran Underbelly. This caused me to spend more time in the sewers where I was able to grind out a ton of sightless eyes, but I'll save that for another blog post. There always seemed to be a ton of people hanging around the area for the event, so it was never hard to kill a goblin unless someone decided to stun it, causing it to make an escape portal. If the kill was successful, a portal would spawn to take you away to the "Cow Level" upon clicking it.

Upon entering the "Cow Level", you would have a five minute buff that allowed you to stay in the zone. It was just a field filled with, you guessed it, cows! After enough of them was killed, a rare spawn called the Cow King would come out and fight you. He dropped a Twelve-String Guitar that plays the Diablo Tristram theme. If you ever wanted to be a bard, this is your chance! It's a shame it doesn't have your character hold a lute while strumming along. The boss also had a chance to drop the Livestock Lochaber Axe though I sadly didn't get a chance to collect that item. The next part of the event left me to grind out enough scrolls to combine with a tome to make the town portal toy. I thought for sure killing all of those goblins would eventually net me a Horadric Satchel, but that bag ended up taking me the longest to get. One ended up dropping for me two days before the event expired. 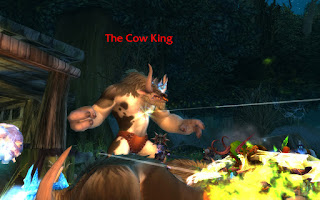 While a lot of people probably wanted more from this event, I'm surprised and really glad that Blizzard actually gave us something to do. It was really refreshing to see a crossover in WoW, and I hope they would do something for another one of their games once it reaches a big milestone. This could have even made players who never set foot in the Diablo universe give the game a try.  If this was a little taste of what's to come with micro holidays, I'm all for it. Our first official micro holiday is happening this week, and I'm sure I'll want to talk about it. Regardless of what you thought about the event, it was a nice little break from the monotony of world quests and artifact power grinding.