Welcome to the Underbelly

I cannot believe that I'm sitting here about to write something that potentially evolves PvP. This is an aspect of the game I really don't enjoy, not because I don't find it fun, but because it tends to bring out the worst in me. Repeated deaths, especially by the same person, throws me into a seething rage, and I have been known to mess up a mouse or two due to this. So I tend to leave PvP to the ones who can handle it. Legion brought some really awesome looking mounts acquired this way, but the one that immediately caught my attention was Ratstallion! It's no surprise that spending a lot of time in the Underbelly of Dalaran would get you a rat mount! If you played during Wrath, you may even remember spending some time in the sewers trying to fish up a giant sewer rat. The conditions down there haven't changed, and it's still as grimy and seedy as ever. I'm just going to say that if you plan on getting a coffee while down there, I'd skip out... 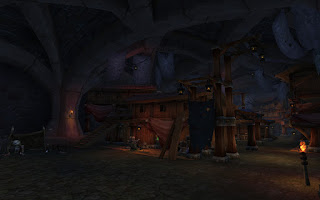 When I first decided I was going to collect this mount, I began by going into the Underbelly and doing the quest that is sometimes available from Fizzi Liverzapper. That quest usually nets you 150 sightless eyes, and is just good to get done if you're in a hurry and can't stay down there. I figured by the time Legion was finished I may have enough for the mount, but that is hardly a way to grind it out. When the Diablo 20th Anniversary event went live, I used this time to understand exactly when to fight and when to run to maximize my sightless eyes collection. In the course of a few days I went from having 5k to 10k and then grinded out about 1k each day until I had all 20k eyes collected.

If you're heading down there, you're going to want to keep an eye out for the "bosses" that spawn. These drop a hefty amount of eyes, especially if you can use a wild mana wand on them. I suggest buying a few of these to keep on hand since you will collect 5k eyes (the max amount you can hold) faster than you think. Buying a feast for everyone also helps as it gives you a nice food buff. Don't forget the temporary mount from the rat crate as well! If the guards happen to go on break while fighting a boss, I would usually just toss up a few AOE moves. If I was lucky I would get a kill or two. If someone would attack me, I'd run away as fast as I could; I'm such a coward, sorry! If you want to wait out the guard's break, you can, but you can also hire a body guard to safely allow you to roam around without being attacked. 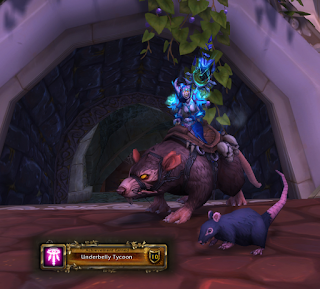 I did have a complaint with the default hired guard buff. Other than right when it's about to expire, you don't know how long you have left on it. This can be frustrating for those like me who are trying to grind out sightless eyes with the least amount of PvP as possible, looking for pets to battle, fishing, or even camping the BMAH for that one piece of tier 3 you REALLY want. My boyfriend decided to come to the rescue and create a simple addon that does exactly that. It's called Underbelly Buddy and it tracks the time of the hired guard buff obtainable in the Underbelly of Dalaran. So if you were frustrated with the buff as well, I definitely suggest checking it out. You may find it really helpful!

Though 20k sightless eyes seems like a daunting amount at the beginning, it definitely isn't. If you were putting this one off because the PvP aspect may have turned you away from it, come back! The last tip I can give you is to take it slow and farm out 1k eyes a day. This way you'll be getting your achievement and Ratstallion before you even know it. Good luck and remember, hold onto your wallets and skip out on the coffee!