All I Got Was This Shirt!

I took a look at my banks; what a mess. I've pretty much given up any hope on organizing to see what gear and weapons I have until the Legion transmog system is released. Thank goodness I have a guild because I do store a lot of non soulbound items in there (Twilight Cultist set, starting items, Dalaran Wizard's Robe, etc.) My eyes immediately look over to my shirt collection. Not only does that take up the second largest percent of my inventory, but it also takes up a good bit of space in my guild bank. I know what I'll do, let me a list of what I have and then see what I'm missing! Something that I thought would take me about an hour or so ended up consuming most of my WoW playtime that day. You know what though, I didn't mind one bit! 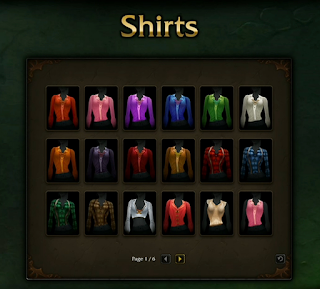 I was shocked to see what I actually had. Some of my characters even had their original starter shirts - eww. I had no idea some of these had been removed from the game. Velgana was also only missing two patterns; Bright Yellow Shirt and Rich Purple Silk Shirt. I think it will be a while before I get the second pattern, but that didn't stop me from trying to farm it while I gathered up cloth to make other shirts. Let's just say that I'm well stocked up, and can make shirts for many. My guildies will probably get a t-shirt care package when Legion drops whether they like it or not! 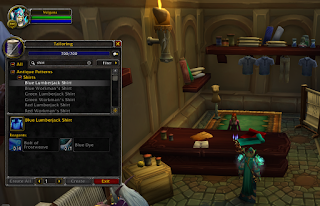 So with my list looking a lot shorter, I decided to call it quits. Most of the remaining shirt on my list are purchased from vendors. All things easily picked up once the patch drops. I'm looking forward to Legion and all the new bag space it will bring. My guild bank will thank me as well. This will also probably help me feel less paranoid about losing certain items that are no longer available in game as well. If you're bored and have nothing to do, but still want to be in Azeroth, I definitely suggest having a look through your banks and attempt to get organized. You never know what treasures you're going to find in there. *cough* 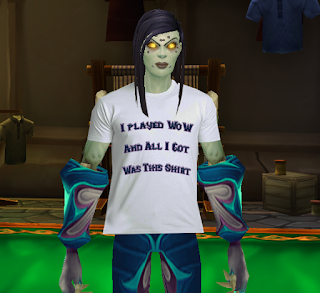