Disclaimer: As of 2021, there is a lawsuit going on surrounding ActivisionBlizz. A few days later, Kotaku posted an article which features candid photos of many of the developers including Jonathan LeCraft. I am disgusted at everything about this lawsuit and do not condone any of that behavior. He is no longer on Twitter, but I have screenshots of my mini pet request from 2014 and just wanted to give a heads up.
The sea calf army is a go! Well, not yet, but at least in Warlords of Draenor. I started my crusade back in October of 2013 when I first set my eyes on little Allie on the Timeless Isle. It was in October of last year that I discovered this little cutie, and I began obsessing with wanting one as a mini pet.

I thought nothing more about it until around December when the Harpy's Nest blog decided to host a mini pet competition. Of course I decided to do my entry on the Sea Cows from the daily quest The Way To His Heart... in Northrend. I ended up winning the competition and was extremely grateful for it. About a month later, Jonathan LeCraft asked what new battle pets we would like to see. Of course I replied! 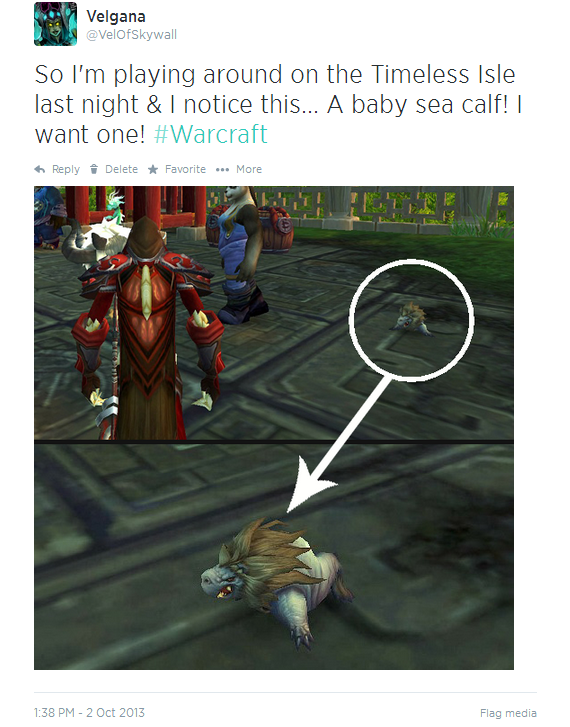 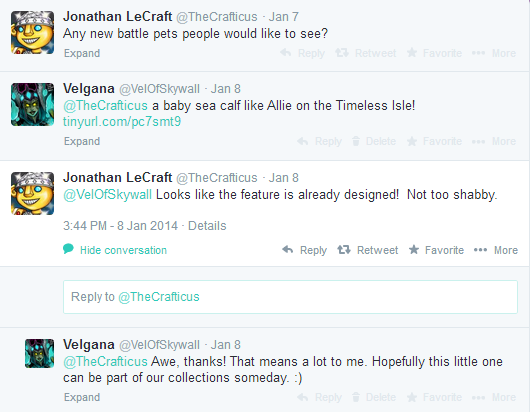 After this, things were pretty quiet on Twitter. I think I asked Jeremy Feasel and maybe one more dev, but I can't find anything about it if I did. However, I got no answer, so I left it alone. Since the Warlords of Draenor Beta was announced and in full effect, sites have been data mining and posting things left and right. I've was keeping up with pretty much every mini pets that was being added so far, but I  was not seeing my little sea calf. Finally I decided to ask again. 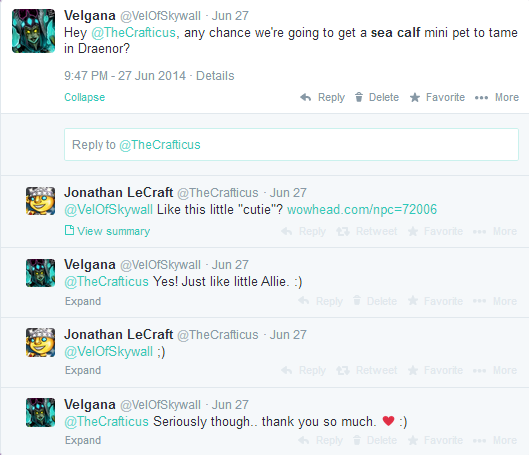 So collectors who have also been wanting a sea calf mini pet for a while, rejoice! We will be able to add this little cutie to our collections in Warlords of Draenor. I think it was determined that this one will be coming from fishing.

So I would like to throw out a million thanks to TheCrafticus for answering my requests on Twitter and doing something so simple for us mini pet collectors who really wanted one of these! This is definitely one little guy I will be happy to cross off my list! You've definitely made this Undead mage very, very happy!