When Erinys over at Harpy's Nest decided to post a competition based around mini pets, I couldn't have been more excited. Here were the rules:

Pick one of the following
1. Store purchased pet
2. Pet available in game through pet battling
3. A creature which exists in game but isn’t yet a mini pet
and describe how you would make it available if you were a game designer. It could be through questing, through a random drop or from something else entirely. Your submission could be screenshot based, purely text or in iambic pentameter if that’s what floats your boat.

I am currently working on a mini pet wish list post, so this competition was perfect for me to throw in one of the mini pets I have been lusting after since the Timeless Isle was implemented... Reef Calf! While it doesn't currently exist as a mini pet in game, I definitely think it should.

Here is the back story:
I was playing around on the Timeless Isle just like any other day. I was either going pet battle against Little Tommy or do my Celestial Tournament weekly when I noticed this little reef calf named Allie sitting there looking adorable. I immediately tweeted about it and wondered if we would ever get to have a reef calf of our own! 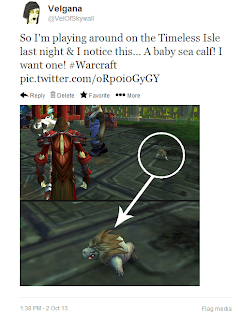 Implementing it:
Back in WotLK there was a daily that would gain you reputation with the Kalu'ak called "The Way to His Heart...". 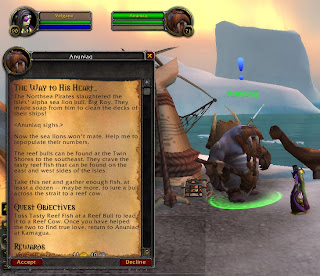 During the quest you would have to catch some Tasty Reef Fish, feed the Reef Bull, and make him meet the Reef Cow. Love will blossom soon after!
Much like the daily quest in Cataclysm to get Pebble and the other daily quest to get the Mini Jouster you didn't pick on the initial quest, I think they could implement the Reef Calf by having you do the daily 10 times. 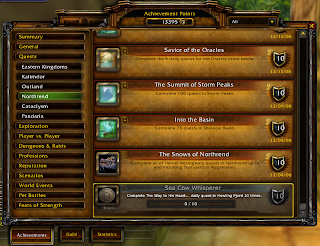 After that, Anuniaq will send you a letter saying how happy he is that the Reef Cow population is now flourishing and as a token of his appreciation for what you did, here is your own sea calf to take care of! 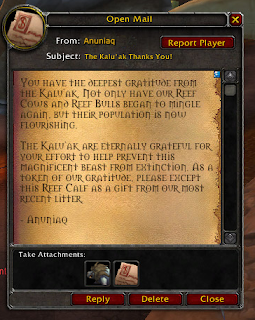