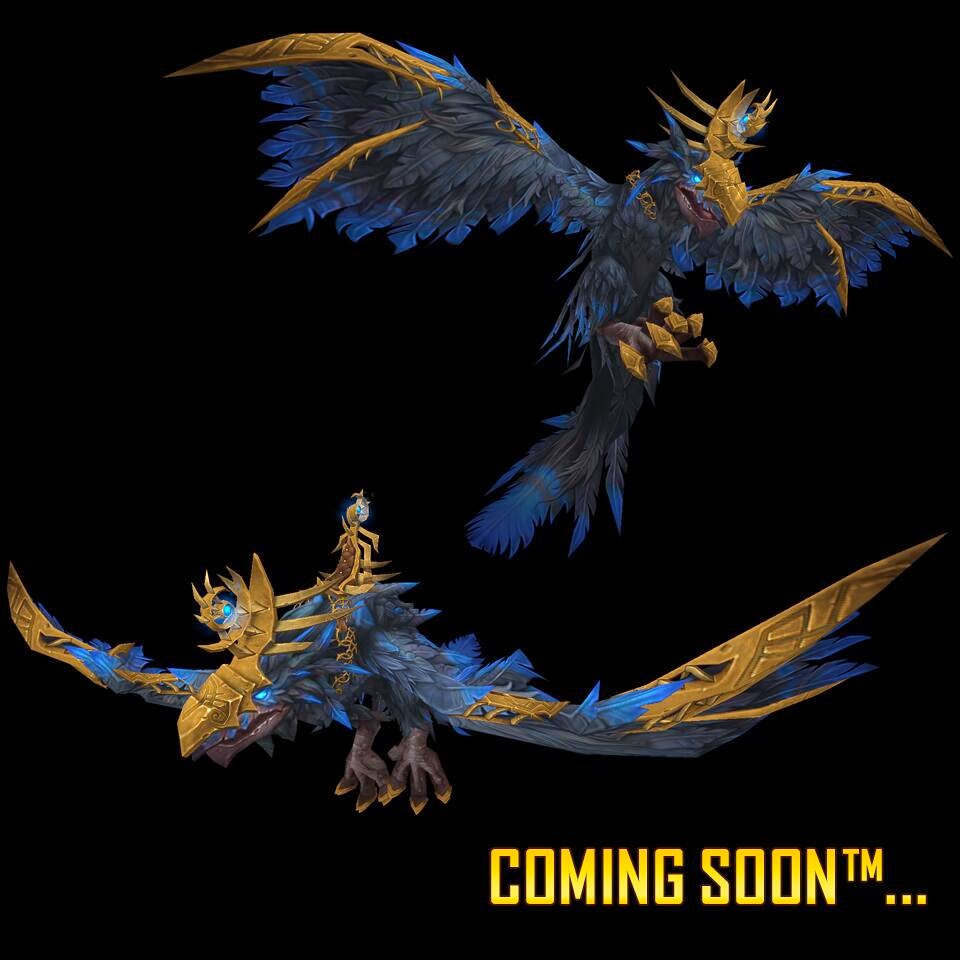 So tonight Blizzard showed us a preview of an upcoming mount. We have no idea where it will come from yet, but I do know that it looks amazing. On twitter I was a bit skeptical about it being the Warlords of Draenor Collectors Edition mount, and I was thinking it may be for Scroll of Resurrection or even another Annual Pass. However, after giving it some more thought and looking at the mount, it may indeed be for the CE. I decided I think back to Outlands, Arakkoa, and the Raven Lord Anzu.

"A mysterious avian deity worshiped by some of the more savage Arakkoa, Anzu is a being whose origins and powers are unlike any other member of Outland's fallen pantheon. The Naaru are silent regarding this malevolent creature, for Anzu's ways are hidden from even them."

Let's travel to Sethekk Halls where Anzu is located. The Arakkoa that have taken refuge there are known as the Sethekk cult and are led by the Talon King Ikiss. Their cult believes that they are the only true Arakkoa and servants to their "Master" - an old god. They took refuge in the Sethekk Halls after the destruction of Auchindoun, viewing it as their master's second coming. Here they remain and search for him in the ruins.

What about the raven... There is a lot of scattered lore on Anzu following the Epic Druid Flight Form quest line. The quest line was removed in Cataclysm and is no longer available. You can read the entire thing here.

During the quest line, you are tasked with waking Clintar Dreamwalker from the Emerald Dream to gather some relics. Upon his slight awakening and a few exchanges, he talks of being followed and it could lead to his death. He also talks of a shadowy and sinister presence that has invaded the Dream and wants to spill over into the world. His spirit helps you collect the three relics needed, but you are interrupted by the Aspect of the Raven.

"Foolish druid! Dividing your essence has weakened you, opening the door for my master to dominate the Emerald Dream. Your spirit and body will die here!"

You are forced to defeat the aspect and continue on with your journey. After bringing the relics back to Morthis Whisperwing, he is disturbed at the Raven Aspect in the Barrow Dens. The next quest leads you back to Outlands in search of the Book of the Raven. You have to search for the spirit of Sai'kkal the Elder a priest who worshiped Anzu. He reveals that the book was stolen and the tablet was shattered by the Skettis cult and buried around their city. Despite being outcast by his fellow Arakkoa, he still remains faithful to the raven.
"From the dreams of his enemies shall the raven spring forth into the world."

The quest then takes you to find Raven Stones to piece back together the Book of the Raven. Arthorn Windsong is able to put the book back together. She briefly tells of the contents of the book:

"It's all here... how the raven's followers captured and subdued the spirits of rivals, trapping them forever within stone statues! The tablet even mentions the raven god's name -- Anzu. I'd thought it was lost to history! There's something else here, too. After a description of a bloody battle and the downfall of the raven, there's a prophecy. Anzu will haunt the dreams of his enemies, twisting them to affect a return to this world..."

You then travel to the shrines to capture the essence of the eagle, falcon, and hawk. The essences are combined with a Moonstone from Azshara, and you are tasked to defeat Anzu. After the defeat, the druid was given their epic flight form, and were able to keep the item to summon Anzu again. The quest states:

Your defeat of Anzu, the raven god, is truly a remarkable accomplishment. He may not abandon his quest to return to Outland, I fear. As long as he has followers here, he will attempt to rise again. Keep the essence-infused moonstone with you in case we have not heard the last of Anzu.

Reading through the entire quest line, throws me back onto the topic of Old Gods. I'm thinking, much like Sara is an avatar to Yogg-Saron, Anzu may be an avatar himself. I engaged him into battle and this is what he taunted me with:

I'm not sure a raven should be whispering to me, but I do know that Old Gods like to. Now this is all just speculation, and I always like to go off on an Old God theory when I can. For all I know this could be another mount just tossed into the Blizzard store as an updated Reins of the Raven Lord. It does seem like Anzu is extremely powerful and despite the quest line, we still don't know much more about him. I'm hoping since the Arakkoa will have a huge part in WoD, his story will be explained a little more. For now, it's always fun to speculate and see how close you can get to connecting the dots. Where do you think this mount will fit into?

Now I leave you with the Prophecy of the Raven God:

"From the darkest night shall rise again the raven, shall take flight in the shadows, shall reveal the nature of its kind. Prepare yourself for its coming, for the faithful shall be elevated to take flight with the raven, the rest be forgotten to walk upon the ground, clipped wings and shame.

Steel your minds and guard your thoughts. The dark wings will cloud and consume the minds of the weak, a flock of thralls whose feet may never leave the ground.

The old blood will flow once again with the coming of the raven, the return of the darkness in the skies. Scarlet night, and the rise of the old.

The raven was struck down once for flying too high, unready. The eons have prepared the Dark Watcher for its ascent, to draw the dark cloak across the horizon."