Since October is right around the corner, I have some pretty cool things planned for each week. I wanted to get things started with a few Hallow's End costume transmogs for cloth wearers, and some other odd items that would make for spooky additions to your collection! This is my favorite in game holiday (just like Halloween is my favorite IRL). I tried to use items that are available for everyone and not too difficult to farm if you need to. Plus, you could always find some items on the AH. Here we go! 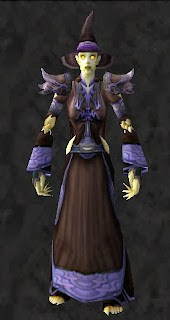 Helm: Wicked Witch's Hat
Shoulders: Thuzadin Mantle
Cloak: Cape of the Black Baron
Chest: Black Mageweave Robe
Gloves: Black Mageweave Gloves
Belt: Fishy Cinch
Boots: Black Mageweave Boots
Weapon: Farmer's Broom - yes I realize this item cannot be transmogged, but how cool is it to run around with your own spooky looking broom!
Extra: I like to keep out the Feline Familiar since it's perfect for a witch costume. Also, if you get the Broom mounts from the Hallows End, you can mount on it and the pet will do the same on its own little broom!
WoWhead Set Link 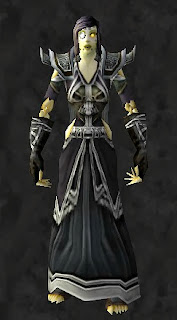 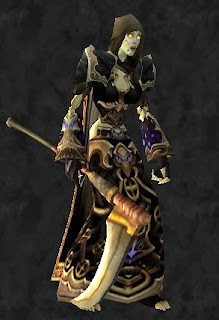 Helm: Thistlefur Cap
Shoulders: Duskhallow Mantle
Cloak: Warmonger's Cloak
Chest: Robes of Rhonin
Gloves: Gloves of the Blood Prince
Belt: Runed Stygian Belt | Cincture of Polarity
Boots: Saltarello Shoes
Weapon: Telaari Polearm | Grim Scythe
Extra: I think I would use the Ghostly Skull mini pet with this costume. After all the grinding out you will do for the scythe, you won't need anything fancier!
WoWhead Set Link 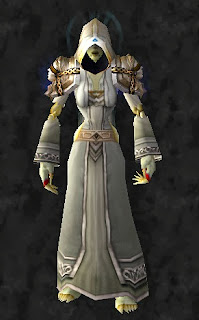 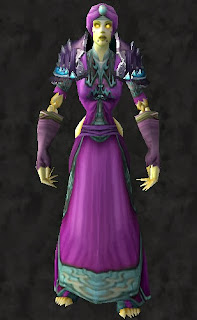 Helm: Mystical Headwrap
Shoulders: Mantle of the Locusts
Cloak: Chromatic Cloak - Since this cloak would take some grinding to get made, personally I wouldn't even show a cloak with this set.
Chest: Robe of the Magi
Gloves: Gloves of Meditation
Belt: High Councillor's Sash
Boots: Elder's Boots
Weapon: Nightstaff of the Everling
Extra: For this costume I would definitely be using my Magic Lamp while riding around on Frosty Flying Carpet for a mount!
WoWhead Set Link

I haven't decided on what I will make Velgana wear yet. If you decide to dress up your toon this year, I'd love to have a look. Feel free to leave a comment below! 22 Days until Hallows End, and I cannot wait!