I normally don't write more than one blog post a week, but my mini pet guide is taking a little longer than expected... not by my choice. You can take all concerns up with Mr. Pinchy! This week brought a good bit of things I did want to touch upon so here we go.

Firstly I want to congratulate my boyfriend, Pigletoos, on having the winning roll for the Clutch of Ji-Kun during his raid last night! I couldn't wait to take a screenshot of him with it, and I have to say that I'm finally a bit jealous about something he has! 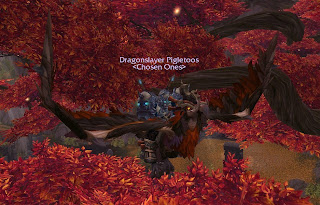 Secondly, unless you really don't keep up with the Warcraft community, you probably heard/seen Blizzard's 6 part series called The Burden of Shaohao. It follows the journey of Emperor Shaohao and how he overcomes his negative emotions. I don't really want to spoil any of it because they are amazing, so click the links below to watch them from the official Warcraft Youtube channel!

Also, this wallpaper is my current desktop! The entire series is beautiful!

Lastly, I really wanted to talk about this. Today Zarhym tweeted a link to a thread stating that they plan on "cleaning" up the Warcraft website and armory. (View the thread here!) I started browsing through the things they plan on removing. Most of the guides and game resources can be found elsewhere, more detailed and better than what Blizzard has to offer, but to my horror saw what they want to remove from the armory profiles:

WHY?! I expressed my disgust for this on Twitter and followed most of the other player's complaints on the forums post. Warcraft tweeted this claiming that it's not used that much (assuming they are gathering data from visits to those parts) and that (what I'm assuming) the cost to keep those features running aren't worth it. So then they link a number of other sites that can track most of the things that are already on armory, which is fine. I already use Warcraft Pets and Warcraft Mounts. However, this just leaves a bad taste in my mouth and screams to me, "Why put resources in these things when there are other sites out there that do it? We don't have to pay those other sites...". *shrugs*

Even with all the complaints on the thread, I highly doubt they will reconsider any of it. However, Wowhead has stepped up to the plate and I'm quite impressed. I used to not really care for their profiles, but it's been updated and now I really like it. So if those things will be taken out of the armory, at least we have one site that tracks most of the things, and we won't have to scramble around the web with profiles on a ton of different sites. I'm sure we haven't heard the last of this... and I can't wait to see what they decide.