Not My Warchief. Not my Story.

This is a post I've been thinking of since the very beginning when the story for Battle for Azeroth was announced. I was one of those people who decided to wait before jumping onto the bandwagon of disappointment, but the closer we get to the expansion release, the more annoyed I get with the direction the story has decided to take. This is going to be more of a rant post, so I understand if you want to skip it for something a bit more cheery. This post may also contain small story spoilers for Battle for Azeroth. If you don't want to be spoiled, please skip over this one.

I realize hearing this coming from someone who has mained an undead for pretty much ten years is going to sound really stupid, but please hear me out. I have never been a fan of Sylvanas, and I don't like how fans of her always try to make her questionable actions seem justified. She has never cared about anything more than herself and her people's survival - even if those people may not want to be raised to live their life as undead. I still cannot wrap my head around the choice to make her Warchief of the Horde, a move I'm sure Vol'jin would never pick. I personally think they still missed a great opportunity to use Legion manipulation and Varimathras to convey this, but we didn't get any of that. We received a dead Vol'jin just to make things fair on both factions (I feel Varian's death over-shone his therefore cheapening it), and a new leader that left many scratching their heads.

When I became interested in roleplaying a few years back, I took this into account when I wrote Velgana's backstory. While I don't roleplay her, she deserved it for being my main for so many years. A quick breakdown is that she's not happy where she is, but she tries to make the best of it and even acts as an informant when she can. While I understand Warcraft doesn't allow special exceptions for the player, I still don't understand all the choices the writers are making. I guess it doesn't matter because they will do whatever they please, but as a consumer I have the right to be annoyed by it. I don't have to play the game, but since it's one of my pleasures outside of real world things, I will. I play both factions, but this is the first time I'm embarrassed for the Horde. This is also the first time I'm considering leveling up my Alliance character first.

Despite everything that's happening, I don't agree with the burning of Teldrassil. We don't truly know who started the fire, but I'm hoping it isn't an already hated character such as Greymane. I don't think he'd ever hurt his people like that, but that's just my personal opinion. I also don't agree with the slaughter of civilians as they try to escape. How can you blame a retalliation attack on Undercity at that point? I don't agree with what I've read is happening in Stormsong Valley in Kul Tiras. I cannot see the Horde army standing behind Sylvanas doing exactly what Garrosh did to many of them (especially the Darkspear) a few expansions ago. Is Blizzard setting Sylvanas up for another Garrosh-esque story? I hope not. Are we going to jump in and blame the Old Gods for corrupting minds once again? Can we not have something better? The rehashing of old tales gets stale, and I think many of us are itching for more variety at this point. I don't know what else to say about this all except that I'm just disappointed with the direction this all seems to be taking. 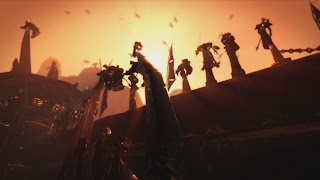 I've thought about this over the last few months, and I'm not sure if I'm still jumping the gun or if I'm just growing out of WoW's story. I love World of Warcraft, but I'm not sure if this story is for me anymore. It will be interesting to see if my mind is changed after experiencing the questing first hand and how things progress during each patch release. Stay tuned because I will revisit this topic in the future as the expansion plays out.