Hello, yes, I'm the person leveling up a paladin once again. Well, at least I was leveling one up. I've been having this on and off again relationship with them for as long as I can remember. I tried out a human female way back in BC before I settled on a blood elf male. I named him Bubbleyum, and before I even got anywhere, I was bitten by the low level pvp bug during Wrath. At the time, I decided to go with the 30s bracket, thus locking my paladin at level 39 and "twinking" him out. I cannot remember the amount of times I ran Razorfen Downs for X'caliboar off of Ragglesnout (who was a rare spawn) or the countless amount of runs through all of Scarlet Monastery. I used the libram to enchant my headpiece and leveled up mining and skinning for the stat boost. I even cheated when the Jormungar Leg Armor was able to be applied to BoE legs and sent to a low level character. I never did get my Pendulum of Doom and I wasn't crazy enough to buy the really expensive Naxx shoulder enchants, but I was still pretty tough in battlegrounds. 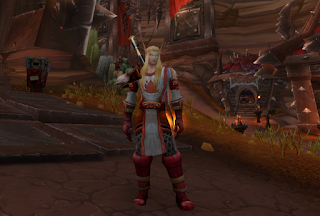 So new expansions came, the zones changed, and heirlooms were introduced. I always thought about bringing Bubbleyum back into pvp, but I couldn't do it. So there he stayed in the city, full Scarlet set, stuck at level 39, and forced to be my bank alt. So why not level him? The answer is simple - once he hits level 40, he can no longer wear the Scarlet set. I mean, sure he can wear it and run around, but he can't transmog to it. This breaks my heart no matter how lore breaking it may be. (I see you lore people rolling your eyes!) So what did I do during WoD since I always wanted a paladin of my own? You guessed it, I started leveling up another. 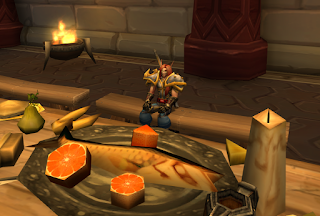 Here is Fennel. We had such great plans. We had just made it to Northrend when Legion brought some rather interesting news. Of course the game is still in alpha so a lot of things are still up in the air. I was actually in the process of leveling while taking my alt+tab twitter break when I scrolled past this:

Some low-level Mail items are Plate in Legion - plate-wearers don't have to wait until 40: https://t.co/AuLiY60TNe pic.twitter.com/aDbw28LNbo
— Wowhead (@Wowhead) December 22, 2015

What?! Is it true?! My oh so loved Scarlet set may be getting changed to a plate set. Another thing was that classes that eventually are able to wear plate/mail will start out with that armor proficiency instead of learning them at 40. I was so thrilled that I logged out and left Fennel in the inn. If this change stays for Legion, which I'm hoping it does, I will be unlocking my original paladin and using my Legion boost on him. He's had to wait a long time, but hopefully that all changes. If things don't go as planned then I will boost Fennel and continue on as I originally planned. I know it's such a minor thing compared to all the other stuff that Legion has in store for us, but I think it's time for me to get back to playing the only paladin that ever truly mattered to me.