First let me start off by saying that I'm simply stating my opinions on the matter. No need to attack or get upset about it. That being said, unless you've been living under a rock, you have probably heard about the Blizzard survey that has gone around pertaining to buying level 90 characters. My boyfriend, Pigletoos, actually got the survey to complete and didn't take any screenshots, but he did come in the room to discuss it with me. Recently on Twitter I've been seeing the question come up about, "How do you feel about having an instant level 90 in WoD?" and more importantly, "How do you feel about being able to purchase a level 90 character?". 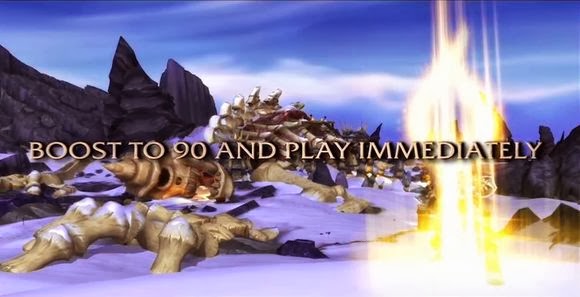 Let's travel back to Blizzcon 2013 when Warlords of Draenor was announced along with this feature - The ability to boost one character to level 90 and play immediately. I can see a ton of people who quit in previous expansions wanting to come back and easily be able to experience relevant content again without feeling ridiculously behind everyone else. I also think this is great because someone like me, who already has a ton of alts, can level up a character instantly to 90 without having to go through the entire questing experience again. Let's face it, while I don't mind questing, the 5th or 6th time doing it gets a little repetitive and quite boring. In fact, I already have a Shaman saved that I think I will be using as my one free instant level 90! I just can't figure out if I want her as a Dwarf or an Orc.

Now on to the more controversial matter - buying an instant level 90. Should this even be implemented and how much should it cost? The answer for me is, sure, let people buy level 90s. Chances are the people who are going to be purchasing this option want to be max level and get geared to raid or PvP as fast as possible because that's what they enjoy doing in game. There is nothing wrong with that. There is also nothing wrong with wanting to level up your character the old fashion was either. I don't understand the complaining about putting a feature like this in the store... it doesn't affect the original way of leveling up, and it's not needed to play the game. Remember when Blizzard put those cosmetic helms in the store and people flipped out? I do, and I don't think anything really has changed due to that.

Now I know I can't compare cosmetic helms to instantly leveled characters, and the biggest complaint is always this - You learn to play your character through leveling up! If someone buys a max level character, they will be running around not knowing how to play because they didn't level up! This statement right here makes me cringe. Personally from running LFR, questing, and just watching people out in the world, I can tell you... people have already made it to max level and STILL have no idea what they are doing. I will always argue this because I feel that you don't truly learn how to play your character until max level anyway. Sure you can learn what certain moves do, and what moves you should use in special situations, but I don't think any of this truly becomes relevant until you are max level and on an equal level content zone. You can argue this with me, but I am not budging on that issue. 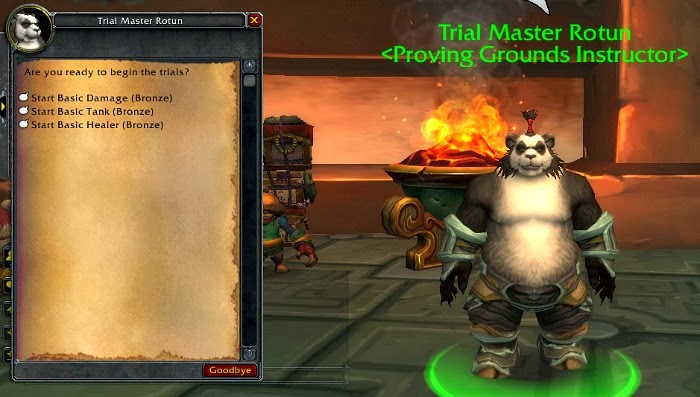 With the addition of Proving Grounds, Blizzard has already taken the step to get people to become more comfortable with playing a new spec or maybe dusting off that alt to make it their new main. When the Timeless Isle was introduced, I respecced Velgana to Frost. I've never played it before, but using Proving Grounds to try things out really helped me. I can't remember if I read it somewhere, or it was just a suggestion, but I think throwing in a repeatable scenario for the instant level 90s to complete would be a good thing. In fact, make it available for everyone, because we can all use a little practice! This could help players get familiar with new moves/new specs or whatever else they want to experiment with.

Now, how much should this feature cost? I really have no idea. I would say maybe $20-$30. I'm guessing the best way to go about this would be to see what is the average amount of time it takes for someone to normally get to max level. I know with heirlooms, chain running dungeons while questing, and all the guild/holiday perks, the time is definitely significantly reduced. I guess when it comes down to it, Blizzard will charge whatever they feel like for this service. Hopefully for people who actually want to use this, it isn't bank breaking. Is it a feature I would use? Probably not, unless I wanted a duplicate class that I already have on the same server. I don't see that happening though. I would save my money and use it on mini pets, mounts, or cosmetic items from the store.

Regardless if you like this feature or dislike it, it's probably going to happen, and we're just going to have to get used to it. I don't see myself quitting the game over something this trivial and silly though. It won't effect my game play and experience and to me, that's all that matters.