Here is a new Blog Azeroth topic, and a really good one that can help me get some in game and real life emotions out.


"Instead of cursing the darkness, how do you light a candle in Azeroth and chase the occasional (winter) blues away?"

The holidays are always an exciting time for Velgana. WoW's 9th Anniversary mixed with Pilgrim's Bounty was great because I was able to get quite a few levels on some neglected alts. Winter Veil will be coming soon, and I love that holiday just as much as Hallow's End! One of my favorite things to do is log into WoW on Christmas morning and open Vel's presents in Orgrimmar. I love the feel of everyone opening gifts and laughing around me. It's just a nice feeling.


However, it's also the time of year that I seem to get discouraged from playing WoW. I guess it's the fact that my family has so many things going on around this time - shopping trips, dinners, general get togethers. I am always about spending time with my family than sitting down and playing any game. In fact, I'm quite unmotivated with the game right now. Not to mention, me and my boyfriend will be moving back closer to our hometown in a few weeks. He will be graduating on the 14th and has a job lined up after that. All of these things are a stressful thing for me!

I also have been feeling the "expansion blues" lately. My Timeless gear is pretty much all upgraded, and I haven't really had the motivation to even run LFR for my sword from General Nazgrim. You know what? I couldn't care less either. Instead, I've been going around and doing achievements I missed so I won't have to worry about them when WoD comes out. I've also been collecting mounts, transmog items, and leveling up all my mini pets to level 10. I still have archaeology to work on too for The Seat of Knowledge, but that will take me a good while.
I started leveling up my mage on Madoran for the WarcraftPets guild. I've also gotten my Skywall death knight to level 85 and my warlock is making progress through Outlands. I've started Pandaria with my warrior, but I'm leveling her up with my boyfriend's mage. He's been really busy with his last college semester, so I haven't been bothering him to level.

So while I've been taking things pretty slow and casual in WoW and blogging, I know I will be back in full force next year and closer to the WoD release. In fact, I'm so excited about it, I wish I could hibernate through the rest of winter!

Bonus screenshot: Happy early Winter Veil to me! Glad I didn't get coal! 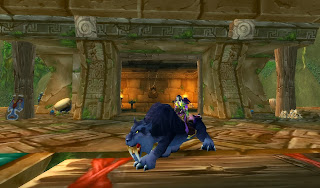