The Tale of Captain Sanders

As a Horde, I love trying to get items that are somewhat unattainable to us. I was also happy to see that there was an out of the way quest to get a pretty cool shirt. So if you Hordies have a few minutes to spare and want a pretty cool shirt that not a lot of people have, I suggest you sit back and listen to the Tale of Captain Sanders! 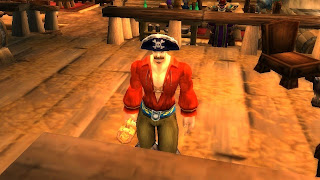 In the Old Hillsbrad instance, you can travel to Southshore and hang out with the locals. You'll notice a few pirates drinking at the bar... it's Captain Sanders and his friend Captain Edward Hanes. After a while, they get tired of drinking, and the two set off outside to go admire Captain Sander's boat and his *ahem* treasures. (You can read the RP text here) 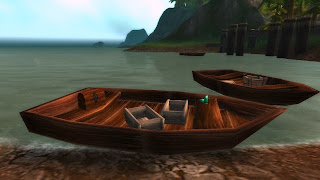 It's pretty safe to say that good old Captain Sanders liked his drink a bit too much. I'm sure he had plenty of adventures until his ship possibly perished along the coasts of Westfall... hell, maybe the Defias Brotherhood had something to do with it! I'm sure he felt panicked to hide his wonderful treasure and tear up the map that lead to it. I believe poor old Sander's possibly perished not long after hiding his old treasure chest. Someone thought he had something really good in there... turns out, they thought wrong! 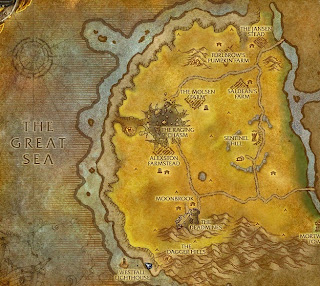 So here we are, along the sandy coasts of Westfall. As a Horde who never really played Alliance, this is an entire new zone for me (I love the lighthouses!). The map's drop rate has been very much increased since BC. I remember it taking me forever to get this item to drop, but after one Murloc kill, I got it. 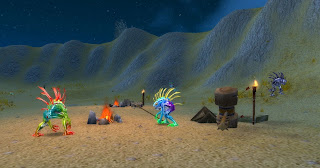 The Captain claims that if you found this, he's long gone. He sends you to find the other three pieces of the map to find where he hid his treasure. First, you're looking for his old footlocker. Some murlocs seem to have taken possession of it - like they even have a clue what it's for! No worries though. :)


Inside the footlocker is our next clue of where to look. It brings us to an old barrel next to the mess that the huge tornado created (I'd love to do the quest that involves that!). Maybe the broken house next to the barrel was where Sander's stayed for a while after his boat wrecked? Or maybe he just decided that was a good place to hide a piece of map, hehe.


Yay, another piece! We're now looking for an empty jug... perhaps one of his old rum jugs? We know the Captain definitely liked his brew. I have no idea about the skull though. Maybe he put it there to scare people off!


Finally! We now get to find good old Captain Sander's long lost treasure! Once you make it to the island off the coast of Westfall, there it is! His little treasure chest is sitting all alone on an island. Next to it is a skeleton that I believe belongs to Captain Sanders. I think someone followed him to where he hid his treasure, they fought, but in the end Sander's was stabbed and died right next to his beloved chest! 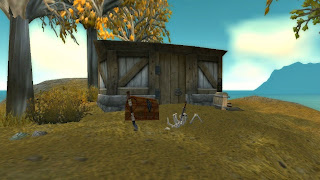 I hope hope you enjoy the shirt. In fact, it's usually the shirt I'm wearing the most. I was glad I was able to re-do the quest too because back in BC I didn't keep the belt. Now that transmog is available, it's nice to have an awesome looking red pirate sash! For a cloth wearer, it looks great with the Buccaneer's Regalia with a choice of three good looking pirate hats to chose from (1, 2, 3). I ended up selling my silver bar on the AH and vendoring the small bag.

It's little out of the way quests like this that make me love WoW more and more! So have fun, grab yourself a Volatile Rum, and so treasure hunting! ARRR!