When I saw that a group was forming, I went to the Isle just to see the massive wipe fest. No offense, but the previous night I went grind out a few bones, and was shocked to see a massive amount on Alliance bones everywhere. He was up, but I'm sure they killed him earlier that day and those bones were from a smaller of a group that maybe tried again...? I figured if the Alliance on our server struggled with him, the Horde would too.

I got the the island and watched them pull about twice before I decided to join in. It's pretty intimidating to see such a big dinosaur come down the mountain and immediately start one-shotting people. 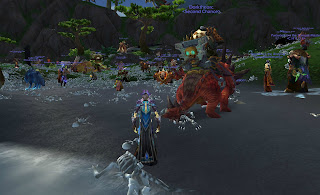 Anyway, I ended up getting invited into a third group  I definitely know we had 2 full raids, and our third group had about 25 in it. We pulled about four times and wiped over, and over, and over... mainly due to our error. On our last attempt, things went smoothly until about 30% or so (maybe even less). We actually did it though. So proud of the Horde... I believe mostly everyone online was there, lol. Congrats to everyone who got epic loots and wonderful things. I just received gold, but took a fun screenshot.