This post is going to be dedicated to pet battle troubles and raptors. :)

I will first start off by saying that I try not to be a mean person in the game. However, I will say that I am pretty cut throat when it comes to capturing wild pets or getting rare spawn kills. That being said, I have had some pretty mean but funny things happen to me in the past two days. When I go about pet collecting, I usually stick my alts in different areas so that I don't have to keep flying back and fourth between places. I had my warrior camping the Flayer Youngling in Terokkar Forest for about a week with no luck on finding a rare. I logged on Saturday night after work and saw a little green paw; so I fought it. During my battle I see someone spit on me. Now I usually see things on my screen before most people... it's the joys of having a high performance computer. So, this person was either upset that I got to it before them or was just a plain douche. Either way, I would like to thank them for the spit because the second one I battled a few seconds later was a rare! :)
Now last night I logged on for the Wander's Festival in hopes of getting a rare turtle. They had a ton of people around and really no area of the beach was without someone there. Like before, I see the paws pop on my screen before most people so I was able to battle one before the druid who was close to me. I guess they either were upset that I got to it first or accidentally got into battle with the big elite turtle, but regardless they were fighting it right on top of me... I'm thinking they were hoping it would do damage to me and kill me or kick me from my battle. No luck for them... not only did I get to battle one, but it was a rare too. :)
So a word to anyone who sees me out in the world collecting rares of pets... I will not hesitate to steal it from right under your nose. First come, first serve. Sorry.

Velgana has always had a love for raptors since TBC. I remember when I was finally able to do the Darkspear troll reputation grind to get a mount. This was a very proud moment for me 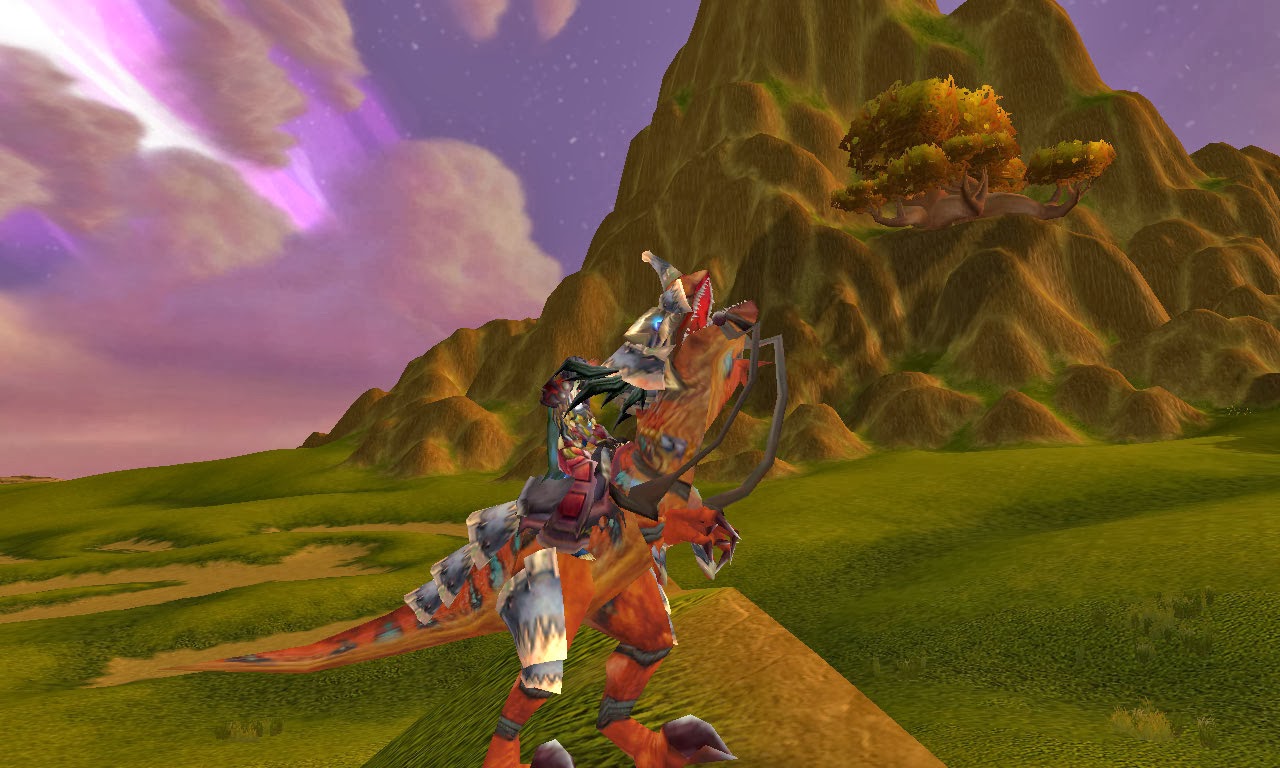 I was excited to have collected all the raptor hatchlings when they came out (including the one that used to drop in Zul Gurub even though I never got the old mounts). When I read the patch notes from 5.2, I was thrilled at the addition of the Zandalari Hatchling - MINI OONDASTA! A few days later I was even more excited when I saw you will be able to get a white raptor mount with some dedication (like 10,000 bones dedication). This I will have. This I can and will do!

I've been making steady progress getting things done that I always wanted to. The next thing on my list is to grind out more of the Lion's Landing Commissions so I can get my mini pet. Not too many things to do... it just seems like time passes by too fast though.