Tonight was going to be the guild's second night to play around in Black Temple, but due to raiding, hardly no one showed up. After about 15 minutes of waiting, our raid leader decided to "kick it old school" tonight with 18 people.

Here enters the Temple of Ahn'Qiraj (aka AQ40). Now for those of you who have never been here before, it's very Egyptian themed. Huge Anubus and Sphinx looking creatures, while everything else pretty much resembles the scarab beetles they would wear as jewelry everywhere.
We managed to down everything up to Fankriss the Unyielding. People started to get sleepy and began leaving. I walked away with Ritssyn's Ring of Chaos, Green Qiraji Resonating Crystal; a bug mount only able to be used there, and two idols which I will probably never complete the quests for. 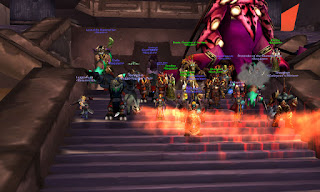