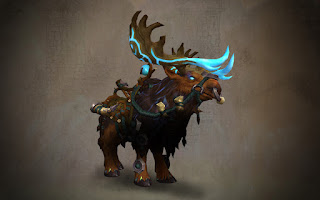 Just in case you've been away from Azeroth for a while, the trendy and cool thing is currently the Grove Warden mount. This thing has been causing a stir since it's unofficial announcement at Gamescom many months back. With the release of patch 6.2.3 this Tuesday, many people have already completed the task of getting this mount. I know that Legion is still many months away, but I know how people can be - they want everything as fast as possible! I know as more and more people get their mount, others who are slacking behind may become more in a panic that they are running out of time - I would fall into this category since I worry about everything! Thinking about all of this brings me back to Seige of Orgrimmar and the Reins of the Kor'kron War Wolf.

The Seige of Orgrimmar era was a big blur for me since it lasted so long, but I clearly remember some of my friend's scrambling to get the War Wolf at the end. I remember the day before patch 6.0 hit, I had a friend that was in a pug that wiped all day on Garrosh. I couldn't imagine sitting at my computer and playing WoW for that long, especially just for a mount! In the end, they didn't make it. I told them not to worry because there would be plenty of wolves to collect in Warlords, and boy was I right.

For me, Warlords had some of the most generic mounts. Now that I'm looking at a list of all of the mounts, there were ten wolf mounts that were available to players. Out of all of these, seven of them are available to both factions. That's a lot of wolves! I imagine the same options will be available in Legion. They've even data-mined at least one moose model and a cute model of something that will probably be a little moose mini pet. I think these may be tied into Highmountain, perhaps via reputation or maybe even through a rare spawn drop. 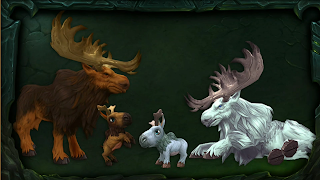 While I know these other mounts don't look as fancy as their raid counterparts, there are still an option for people who missed out. Lately there have been countless of amazing people who have stepped forward to help people in acquiring the Grove Warden. It has been dubbed project Friendship Moose on Twitter, and has proven to be a great success as many people have already acquired their mount. If you'd like to see more information about getting into a group for this, you can check out the official site: http://friendshipmoose.com or use #FriendshipMoose to search on Twitter.

If that's not an option for you, I'm sure you can also use places like Open Raid, and keep an eye on on your server's trade channel and forums for guilds selling runs. There's plenty of time for everyone who wants a Grove Warden to get one, but I just wanted to make a post for those who are last minute and stress about things like this. Don't worry, this won't be the last moose you will see. Good luck to everyone!