As I moved around some things in my garrison, I came across a map of Draenor. I could only assume that one of the peons moved it while cleaning and forgot to put it back where it belonged. As I walked back to the town hall with the map in hand, I noticed one corner was servery damaged. It looked like it was almost cut, but the person decided that was a bad idea and tried to erase the island on it. They didn't do a great job because I was still able to make out the name "Farahlon". Now where did I hear that name before? Oh yes, a garrison mission I previously sent followers out on. 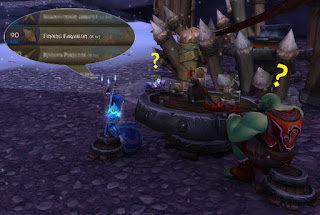 Immediately I left the town hall and questioned a few of my followers. After a bit of interrogation, they confessed to me that they never found the island and the item they brought back was a staff that was picked up by the Laughing Skull clan. Hearing those words awoke the explorer inside of me once again. I had to do it; I had to go looking for Farahlon! I couldn't convince any of the ships I had recruited to take me out there, so I decided to go alone. It was just me, my raft, and the ocean. 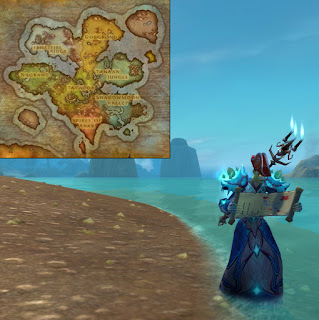 I first stopped by the Laughing Skull village and listened as they told me tales of the magical island lined with large crystal formations and lush environments. There were even whispers of a treasure they called the pearl of Farahlon. A pearl!? Could this be yet another connection to the importance of pearls in Azeroth? I couldn't run out of the village fast enough, but they stopped to warn me of the seas surrounding the island. They were extremely rough and stormy; it would take a skilled ship fleet to survive. That still didn't deter me since I have survived death already.  As I paddled out further and further into the sea, I noticed my skyline change from a beautiful blue to a gloomy orange.

I kept going... and going, and going. I'm sure by now you're wondering what exactly did I find out there? Well, I found fish, magical flying fish to be exact! This group of fish would jump out of the water and fly around for a bit before plopping back into the ocean. I also found a large gron-like skull that had been in the ocean for quite some time to have so many mushrooms growing from it. Perhaps both of these items marked a hidden passage to get to Farahlon, but I sadly couldn't find it. 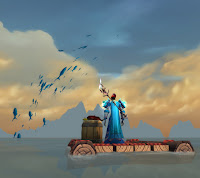 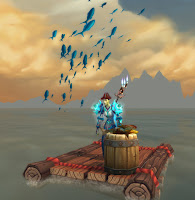 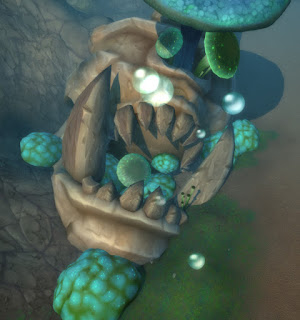 I pushed my raft around for a while longer before I folded up my map and took my hearth back to my garrison. I can't be the only one who had sent countless followers out there to check for something, yet they all turned up empty handed. I will definitely mark this one down in the books to "try again later". Someday I do believe we will find Farahlon, but sadly today was not that day.

If you would like to see the flying fish of Farahlon (as I like to call them), you can fly over to 90,40 in Gorgrond. If you look around under water in that area, you will also find the big skull I talked about in the post. Happy hunting!