So eight days after my previous post on the Long-Forgotten Hippogryph, I became the proud owner of one! By some very odd chance, I managed to get lucky and find all of the crystals. The surprising thing out of this was that I wasn't going look for them, but instead complete some world quests to finished getting exalted with the Court of Farondis. The first one was up really close to the road, and with how the servers now seem to be CRZ all the time, I was sure someone else was hot on the trail. So I took a deep breath and decided to have a look anyway. This time I started at around 2:00 in the afternoon.

As I said previously, the first one I saw was really close to the road. In fact, it was almost on the road. If you are a tailor, you definitely know the area. It was sitting near the ruins where you find Lyndras. It was one of the previously marked locations I had on my macro, so there wouldn't have been a guessing game with this one.

So after I found the first one, I loaded TomTom and used my macros to show the waypoints. Slowly I started visiting each area, hitting Azurewing Repose first. I looked in the cave and saw nothing, but my next stop was around the perimeter of the pound where I saw the second one sitting, waiting to be clicked on. This was also another location marked. Hitting the second one so soon definitely kept my motivation up.

Next I ran up the road all the way to the top corner of the map. The third crystal was near the rundown fountain by Challiane's Terrace. This was a place I had recently added when I revamped my macro, and I'm glad I did. This one is really out the way, and can definitely be missed as there is no real reason to go to that area.

Here is where I hit a roadblock, once again. I couldn't find the last two. I did numerous circles around the zone, checking all spawn points again and again - nothing. I was beginning to feel let down once again, but my boyfriend gave me a little boost to keep me looking. I took a breather and went to WoWhead. One of the comments there inspired me so I decided to, as suggested, go off the beaten path.

My fourth crystal was at a new spot I didn't have a waypoint for. If the location was previously found, it was rarely new. It was located in the middle of the Ley-Ruins of Zarkhenar. I'm so glad I ran through that area because if I didn't, I would have missed it. I also think this is another place where the crystals can easily blend in, causing your eyes to scan over really fast.

Finally, on to the last one. The last place I decided to check was the area around Doomlord Kazrok as stated in the previous comment. Since that wasn't one I had marked or seen talked about before, I was a bit apprehensive. I was already beginning to feel the claw of defeat until I got there, and the crystal was up, right by the tree. I remember smiling before I gave it one final click... 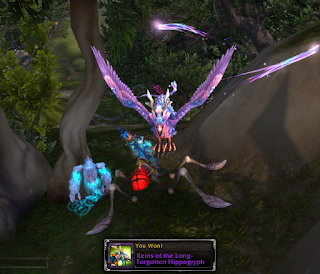 Ah, sweet victory. This time it didn't take me nearly as long and I completed the entire thing around 3:40. So that's done. To be honest, I wasn't having the greatest of days, but that definitely turned it around. So now that the hunt is over, I can move on to other things. I just hope I won't have to click on any crystals any time soon.