Well, I just assumed since it was Winter Veil next week that the Azerothian gods would bless me with my weapon from LFR this week. Nope, still rocking that nasty blue dagger. I even went as far as to use all my rolls on Tsulong. Oh well, maybe next week...

I am loving the new pet battle changes. I was able to get 4 pets up to level 25 in two days. Yes I'm slow, but it's also because I cannot sit there and NOT alt+tab out to some other website. I'm still working on gathering rares and stones to turn others into rares. I'm mainly just going by what I feel like at the time. It keeps me from getting burnt out on an area.

During the Dominance Offensive dailies yesterday, all three of the rare Alliance NPCs spawned back to back. All we got were three Honorable Commendations and a cool achievement. If I do see them again, I will definitely try and kill them. Hopefully I can get Pigletoos a blood-soaked invitation to the Brawlers Guild that way!

Lastly, I love hidden things in the game. Stuff that you wouldn't normally get or see if you were just passing by. A month or so ago I saw an elite called Akkalou while I was flying to do my Cloud Serpent dailies. He had a weird title under his name so I decided to look him up. I saw that they had six Makrura "princes" (as I will called them). Each one drops a shell that is combined to summon "The Pinch King". My friend who is playing his monk a ton this expansion was collecting fist weapons so I let him know about Lobstmourne. 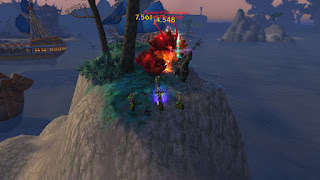 Back to pet battling it is for me. Vel better be good so she can get a good gift from Greatfather Winter this year! :D