Since the release of the Warcraft cookbook, I've been cooking many things from it. This gave me a spark to sit down and sift through some of the recipes I've collected through the years. As I was shuffling though many handwritten sheets, this one little page fell out. It was written on a small piece of notebook paper and it was titled "Orc's Hot Coco". It was a small recipe and something that a person could easily remember though I decided to write it down since I'm very forgetful. I must have stuck it in with my books and forgot about it. Though I may have forgotten that I had this recipe, I definitely did not forget the person it came from. 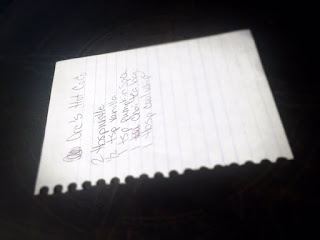 I've been really fortunate to make many friends throughout the years that I've played WoW, and surprisingly some of those friends came from the first "real" guild I was ever in. I was only there for a few months, but we would PvP, run dungeons, and do other silly things. The guild name was Epic, but it contained silly alt characters. The guild is now lost to time, but I kept in touch with some of those people up until around MoP when I shifted around social media and became more private.

One of those people in that guild went by the name Orcofsteel. This all happened so long ago so details can be hard to remember. I do remember that yes, they played an orc, and I think it may have been a warrior. Most of us in the guild were around the same age, so naturally we just clicked. Everyone was easy to talk to and share things with. I remember one late night that Orc shared his favorite way to drink a relaxing mug of hot chocolate. It was nothing fancy at all, but I always loved hot drinks so I wrote down the ingredients (without any instructions) to try it out later on.

Many weeks later I remember Orc began to change. Something happened in his personal life, and he confided in the guild. I also remember him switching his character from an orc to an undead with the new name, Deathbearer. I remember some of our late night chats just sitting out near the sea, and I was lucky enough to still have a screenshot of one of those evenings. Eventually his playtime became less and less until one day he just stopped logging on. I'm not exactly sure what happened to him as there was no Real ID to add to keep track of friends at that time. I hope wherever he is, he's happy. I hope that if he sees this someday, it brings back some good memories of the guild. 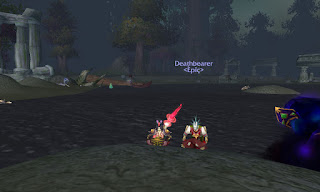 So I sit here and enjoy my own mug of the stuff. I'm going to share it with you all because this post wouldn't be complete without the actual recipe. So here it is, a little more of a refined version of Orc's Hot Coco. Aka'Magosh!

Place the milk, hot chocolate mix, vanilla, and pumpkin spice in a medium saucepan. Bring to a boil and stir until all ingredients are dissolved. Turn off heat and steep Chai tea bag in the milk for 3-5 minutes (depending on how strong you want it). Discard tea bag and carefully pour into two mugs. Top with a dollop of Cool-whip (optional), grab your favorite Warcraft book, sit back and enjoy!