Here we kick off the second week in honor of my ten years in Azeroth. Back when I started playing, I was a classic noob. I knew nothing, and since there weren't many huge communities that exist like today, Thottbot and word of mouth were my only savior. In the past, I focused on a few stories about the dumb mistakes I made as a new player. Do I have a dozen more of those? You bet!

I'm Forsaken so my questing experience started out in Eastern Kingdoms. At that time, I really had no concept to how large the world of Azeroth was. This was during the BC era so there were still only two continents aside from Outland. I remained on Eastern Kingdoms, and around level 30 one of my friends sent me a whisper: "Hey. You been to Orgrimmar yet?" Now my boyfriend and most of his other friends all picked races that started on Kalimdor. It had occurred to me that I could go over there, but the truth was, I had no idea how to even get there!

I replied: "No, I haven't." He came to me and guided me to the zeppelin. He explained that I could use this to get back and fourth to each continent. Before I knew it, we were in Durator. Everything was so desert like and very different from Eastern Kindgoms. He showed me the city and I ogled all the high level players. He brought me around Durator and showed me the troll village. We were having fun then suddenly he had to log. Alright. There I was, stuck in Durator with little knowledge on how to get back to the zeppelin. I left the troll area and began making my way up the road. I knew the zeppelin was around the gates of Orgrimmar (it used to be outside before the revamp), so I figured once I got close I would see it. 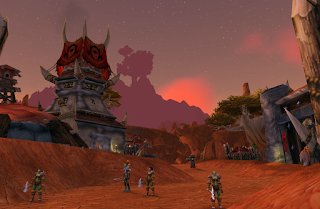 Suddenly I stopped dead in my tracks. In front of me was a town that I didn't remember going through. We had walked along the coast because my friend wanted to show me the crag harpies. I was told that gold dragons around a name meant to stay away because I'd die. In fact, I'm sure I was having Son of Arugal flashbacks. These guards around the town not only had a dragon around their name but were also a red skull level to me. I was scared, so instead of going through the town, I went back around, fighting my way through harpies. I eventually made it to the zeppelin and back to the comfort of Eastern Kingdoms. This little adventure slipped my mind until way later when I was a higher level. I realized the town I stumbled upon was no other than Razor Hill and would have posed no threat to me. I felt really silly looking back on it. I eventually let my friends know about this little story, and they all had a laugh at my expense as well.

The Tale of the Holy Shroud

I have vivid memories of running certain dungeons over and over. Those dungeons include Wailing Caverns, the three in Scarlet Monastery, and Shadowfang Keep. Shadowfang Keep has earned it's place as one of my all time favorite dungeons. I liked it back then, and I still enjoy the revamp. I ran the place so much, that I saw an item called the Holy Shroud drop twice. My alt priest got the first one, and I decided to sell the second one. I was still new to the game, so I had no idea it was a decent helm for a healing twink. I put it up on the AH for probably a fraction of what it was worth and didn't think about it again. 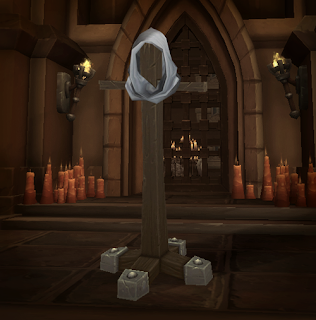 I remember I was questing through Stranglethorn Vale at the time when I received a message from someone asking about the shroud. They said they were a bit short on what I was asking and wondered if I could sell it to them via trade for what they had. Since they asked so nicely, I decided to just give them the item free of cost - Ouch. They were very grateful, thanked me a ton, and we both went on our separate ways. The thought of that exchange never crossed my mind after that day.

Fast forward to quite some time later. I was max level, in a raiding guild, and doing pretty good for myself in terms of gold. I get a random whisper from this person: "Hey! Remember me?" My mind started thinking of PUGs ran with and even old guildies, but nothing clicked. I told the player: "No, I'm sorry I don't remember you." His next reply: "You gave me a Holy Shroud a long time ago when I didn't have the gold." What?! I have no idea how they remembered, but they did. After a small exchange, they asked to meet up and paid me back for my kindness with a lot more gold than I originally had the shroud listed for. I guess the moral of this story is that sometimes a little kindness effects a person in a bigger way than you could imagine.

While the first was an embarrassing moment, the second story definitely left a lasting impression on me. Nice players so make for a positive impact in the game. I hoped you enjoyed these two small stories. I'm sure later in the future I will continue to tell the ones that I haven't really discussed. Before I go, I want to remind everyone of the battle pet giveaway I promised last week. It is now live and will run until 5-15. You can find out more information about it by following the link to the tweet right here! Good luck!