That Look is so Burning Crusade

Legion has been full of throwbacks to Burning Crusade. As someone who started during that era, I have been loving this. With patch 7.2 slowly creeping closer and closer to release, we've been getting more and more information on different things being released. This patch will bring the Tomb of Sargeras raid along with a new tier set to collect - Tier 20. I'm normally excited for new tier sets, but these leave more to be desired. 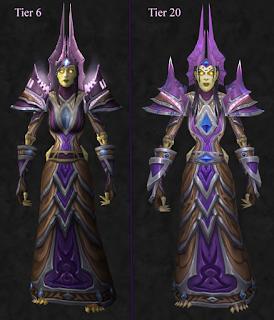 Continuing on the BC nostalgia train, Tier 20 is an upgrade of the Tier 6 sets. I know many people have been asking for high resolution versions of older gear, and Blizzard delivered. Among some of my favorites are the warrior, paladin, and priest. Even the new demon hunter set looks good. Sadly, I think a few of these missed the mark. When I look at some of the colors for the mage set, all I see is a mess. To me, the blue, green (definitely this one), and mythic yellow recolors look like they were altered using a color slider in a photo program and not fully balanced giving it a very strange look when put all together.

Maybe it was just me being a little too nit picky, so I went on Twitter to poke around and see what other people think. A few weeks ago I asked everyone how they felt about the sets. Most people were underwhelmed and most seemed to prefer new sets inspired by older tier instead of a complete update of an older one. I have to agree. I love trying to collect the new sets because they are new. I like to see what the team comes up with using the expansion aesthetics to build a set. Honestly I feel like this fell short on all ends as the original death knight and monk sets that were created look very strange as well.

I know some of my followers don't speak for the entire community, so if you're reading this and have a differing opinion, I'd love to hear it. Do you like the HD remake or would have preferred an original set? Do you really like one of the sets that others have talked badly about? Let me know in a comment below.