I have to admit, I'm having trouble adjusting back to a somewhat normal routine. With traveling and events starting from Thanksgiving and lasting up until New Years, no wonder I can't get things together! With patch 7.1.5 on the horizon, I haven't really started anything new in Warcraft. I've been working on clearing out Vel's quest log along with other things I just never got around to finishing. Doing this has also netted me a bump in my achievement score. I am now up to 19,000 points. This was a nice little personal goal for me to achieve though I know a lot of other people have much more than that.

Winter Veil was also lovely this year. I personally think these are some of the best gifts that Blizzard has given. The disposable Winter Veil suits are awesome, and I really wish Blizzard would consider putting something like this in for the other holidays as well. It gives you a chance to dress up without having to hold onto non transmoggable event items (not like space is an issues anymore) or stressing over the fact that you can't transmog them in general! I was also lucky enough to get the Minion of Grumpus mount from a present as well. I'm glad because I was a bit upset I didn't get lucky with it last year. It's such a massive mount that I probably won't even use, but it's fun to have just in case. 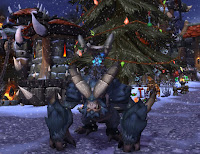 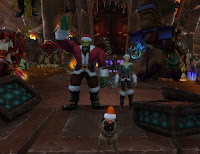 So what's next? With the new year coming in really soon, I plan on continuing working on my backlog of things and updating my to-do list here as they are completed. Of course this isn't a full list of things I'm working on, but more just the collecting parts. I also want to say that the third annual Icecrown Challenge is now live! I plan on doing my run this weekend so I will be making some more noise on Twitter about it. If you want to learn more about the event, you can do so over at Ratsel's post. If you want to learn more about why I run, you can see the two previous years posts (2014 & 2015). If you just want to donate, I'll include the link to that as well - AFSP Icecrown Challenge Donation Link.