I truly couldn't have picked a better time to take a Warcraft break. With all the lovely books that have been coming out lately, there was no better time. Anyone who knows me completely understands the issues I have with reading. I tend to buy books, read a bit, and never finish them because I'm usually so busy with real life and gaming things. Not to mention it takes me a while to read through one fully due to the fact that I'm a slow reader. It's hard to find time to fit everything in! So after taking a step back to distance myself from roleplaying and the Warcraft Twitter community to focus on myself and other person things, I found myself really enjoying my quiet time in a book along with a cup of tea or coffee. 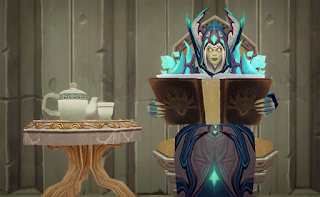 With the Warcraft movie and the new Legion expansion on the horizon, this opened up an entire variety of books. Not only was a novelization of the movie released, but there will also be a graphic novel called Bonds of Brotherhood released as well. Along with this, the novel Durotan is available and follows the events prior to the movie. I decided against reading any of these before seeing the movie as I want to go in with a fresh outlook. I've previously read Rise of the Horde, and while I understand that the movie will be different than the in game lore, I still want to be surprised at the events playing out on screen. Maybe after I see the movie I will consider purchasing and reading some of those, but at this point it's highly unlikely.

I did jump at the opportunity to order World of Warcraft Chronicles, and let me just say that if you were on the fence about doing the same - DO IT! It's a beautiful book, and volume one focuses on Titan lore and the beginnings of Azeroth. I'm not sure how many of these they will release, but I'm hoping to collect all of them. If you were looking into diving deeper into Warcraft lore, this is a great place to start. I also ordered the Illidan novel, and I went in feeling strangely about it as it wasn't written by the wonderful Christie Golden. However, I did enjoy the book though I felt like some parts of it seemed to drag on a little too long. It left me wanting to hurry up to get over the parts with Maiev just to see what Illidan and the other demon hunters were up to. I also wish the publishing company took a little more care in the editing of the book as I found many errors that kept throwing me out of the story. Putting all of that aside, it's a wonderful introduction into the Legion expansion. 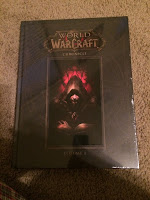 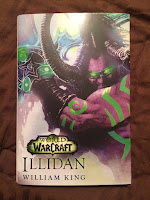 I also picked up a hardcover copy of Curse of the Worgen which I have still yet to read, but I will be getting to that one soon. Other books I may be considering in the future is the official cookbook that will be released in October. We haven't heard much about this yet, but I'm sure there will be more about that in the upcoming months. Hey, if you always wanted to throw a WoW themed party with buzzard bites for an appetizer, this may be the book for you! Finally the last book to catch my eye was the Traveler book series aimed towards children. I instantly fell in love with the artwork, and while I don't have or plan on having children to share this with, I know it will look great in any collection. 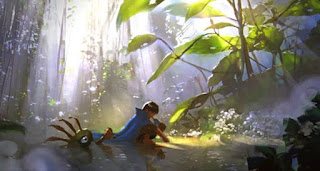 I know many people always complained about having to read many of the novels to get the story on what happened between expansions, but I would really recommend it even if you can fit in just an hour or so each night. Before you know it, you may be hooked just like I am and struggling to put the book down to get some sleep.