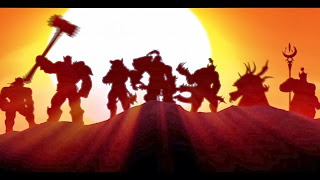 "When past and present collide, the fate of all worlds hangs in the balance." - Prophet Velen

So now that Blizzcon is over and we know what the next expansion will be (R.I.P. Dark Below), I couldn't be more excited. I decided to touch on the things that I am extremely looking forward to for Warlords of Draenor. Note: Most pictures were taken from MMO Champion. They have an extremely good source of everything that was shown!

First off, the zones that were shown off at Blizzcon looked amazing and breathtaking (Shadowmoon Valley *swoon*). I love the fact that we will get to see places such as Black Temple when it was the Temple of Karabor along with many other places that we saw as ruins in Outlands. Finally, in order to get to Draenor we will have to walk through a time twisted red Dark Portal... yes please!

There wasn't much mini pet news, but it didn't matter because I was extremely thrilled on the announcement of Garrisons. I love the idea of being able to build it up, chose what to place and where, and of course... gaining followers. I know a lot of people joke that Pet Battles is Pokemon for WoW, but it didn't occur to me until my boyfriend brought it up that this is almost Animal Crossing for WoW. I know Corey Stockton was playing a ton of New Leaf when it came out, so the idea may have came from there.

I know it may be a bit of a stretch, but I'm happy! I can only hope to be able to add a few of my favorites mounts to the stables, transmogs on some mannequins in my house, and some mini pets in a barn. However, the only thing I'm concerned with is the currency shown at the bottom. No one asked about it and it wasn't touched upon. Any ideas? I'm almost thinking maybe resources to allow followers to do things, but I'm not entirely sure. 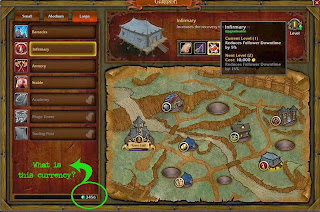 This next one confused me when I saw quite a few people were upset with it - new character models. I don't think most people are upset because they are getting redone, I think they were mad at the fact that Blizzard put resources into this instead of offering us a new race/class for WoD. I personally don't think they really ever need a new class or race. People still can't figure out how to play the available classes that we have nor can Blizzard ever really balance them out evenly. Regardless, I'm glad the decision was to work on player models because it's something that is definitely showing its age in a place like Pandaria. There was a sneak peek at the male undead, and I can only hope the females look just as good! 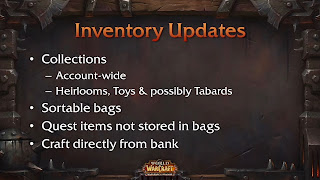 This announcement was wonderful... a hoarder's dream! Heirlooms, toys, and possibly tabards will be getting their own collections! I don't have many heirlooms, but I do have a ton of goodies from holidays, archaeology, and questing. I'm hoping this tab will be account bound also since I had no choice but to get rid of some things on my main. As far as the tabards, I'm hoping this too will be implemented. My entire main bank is just tabards that are rare, no longer obtainable, or I just don't want to regrind the currency for them. Please, please, please make it happen!

I would love to talk about the gear changes and how I can't wait for D3: Reaper of Souls, but that would be a bit boring, so I will quickly touch on the final thing I found really exciting - the ability to level a character to 90 instantly! This upset a ton of people also, but I'm not sure if people understand ONE CHARACTER. Not two, not five, one. This is wonderful for someone who either hasn't played in a long time and wants to get back into the game, someone who wants to make an entirely new character, or even someone (like me) who left an alt to rot in old content. While I am going to be working on leveling up that alts in the next few months, I think I will go with the second option. I always wanted to level up a Shaman and this makes for the perfect opportunity. Now the real questions... Orc or Dwarf?

One thing I am shocked that they didn't announce was a new Annual Pass. I thought for sure they would offer one with the Hearthsteed as the mount, free D3:Reaper of Souls, and WoD Beta access. I would have signed up for that in an instant since I did it last time and really enjoyed it.

With that being said, I really don't know much of the lore of this time period. I of course recognized Grommash from the teaser trailer and the only other clan I could name was Frostwolf. I was excited to see that my boyfriend has Rise of the Horde on his bookshelf. This will be my nightly reading material. I'm hoping to learn more about this savage time in Warcraft history.