The Children of Goldshire and The Legend of Stalvan

While the Horde have their fair share of chilling tales, I find these two from the Alliance side to be particularly gruesome. The first one because we don't know much about them... so this leaves people to go wild with stories. The second one because everything that happened was documented! Sit back and enjoy!

The Children of Goldshire

Even if you've never played Alliance, chances are you have heard of the Children of Goldshire. They are a group six kids: Aaron, Dana, Jose, Cameron, Lisa, and John. They spawn around 7am in the house by Mirror Lake and walk around Elwynn Forest on a set path. Cameron always seems to be the ringleader for their little group; The others will rotate around him as they walk around. After they are finish their rounds, they will return to the house by the lake. 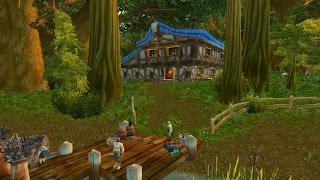 Some say you can hear a few different sounds in the home if you stay long enough:
- a Banshee scream
- a Ghoul call
- C'thun saying: "You will die..." or "Death is close..."


Eventually the children will despawn around 8pm until the next day... so if you go looking for them and cannot find them, they may not be there anymore. 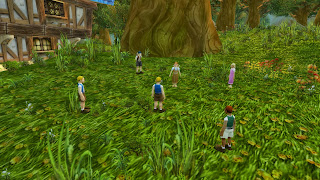 I've followed these kids around a bit in the past and more recently camped inside the house. While the music in the house is different and extremely creepy, I never heard any of the sound files listed. In fact, most of the time I found the children just standing around outside. 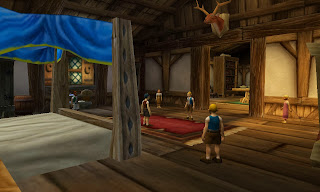 There are plenty of speculation to why these children are there. Some people think their "pentagram" formation may be an homage to the Diablo franchise. Another speculation is that it could be an homage to the Friday the 13th movies since they spawn in the house by the lake and there is a npc named Jason Mathers outside by the docks. They could also be a reference to the movie Children of the Damned. There is also a darker speculation made up by fans...
The kids were murdered, skinned, and turned into the leather goods that can be seen around the house. There are tiny skulls outside the home. People like to speculate that these are the skulls of a few of the children. Perhaps the others were just tossed into the lake to float down stream? 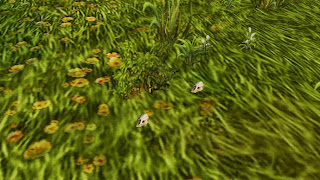 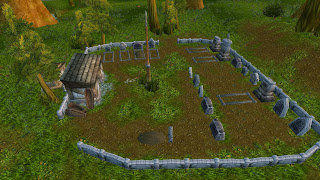 There are also six graves in the Goldshire graveyard that look similar. Perhaps these were the graves of the children that met with a terrible fate and now they haunt Elwyn for all eternity...

Whatever the reason these children roam around Elwynn Forest, they are a bit creepy. Go have a look at them next time you are in the area and stay awhile. You might hear something I didn't. 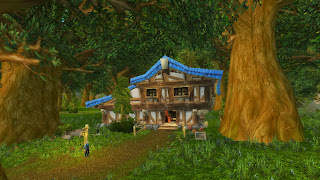 Stalvan Mistmantle worked as a teacher in Moonbrook schoolhouse. After the town was overrun by the Defias, everyone was forced out of Moonbrook. Eventually Stalvan went looking for work around Elwyn Forest. He stumbled upon the Flintridge family. Stalvan talked to the father, and it was arranged that he would be the tutor of Tilloa and her brother, Giles. Stalvan became infatuated with Tilloa. She would give attention and show affection back to Stalvan. This led him to believe that he actually had a chance with her...

One day Tilloa showed up with a strapping young lad, holding hands, smiling, she exclaimed that they were to be married soon. She introduced Stalvan as, "a nice old man". This infuriated Stalvan, they weren't but a few years apart in age! He assumed the interest she showed him was more romantic than just a friendship. Clearly she viewed Stalvan more like a family member than anything.

Not long after, Stalvan murdered Tilloa, her fiance, and the entire family with an axe at their estate by the Eastvale Logging Camp. He claimed the bloodshed to be equal to the amount of tears he cried. After the murder he was last seen headed for Duskwood and now many people believe him to be dead... 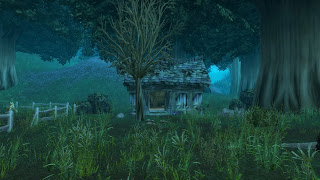 This is where the original quest line cannot be completed as it was taken out the game, however, there is a new one that sends you back on a mission to deal with Stalvan Mistmantle. In the original quest, a psychic woman by the name of Madame Eva has a horrific premonition about her granddaughter. The only name she was able to come up with from her premonition was Stalvan. You are sent on a wild goose chase trying to figure out what happened to him and if he is still living. Ultimately, you find his whereabouts and he is killed. His ring is brought back to Madame Eva as proof of his death. 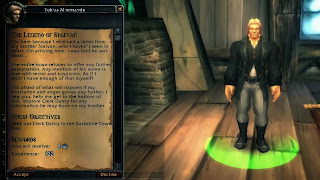 In the new questline, you meet up with Stalvan's brother Tobias Mistmantle. He exclaims that he's received a letter from his brother, but upon arriving to Duskwood and talking to everyone, they claim Stalvan is either dead or just don't want to talk about it. You seek help from Madama Eva once again who gives you the ring. You head to Manor Mistmantle with Tobias, summon Stalvan, and finally put this fool to rest. 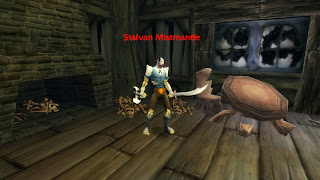 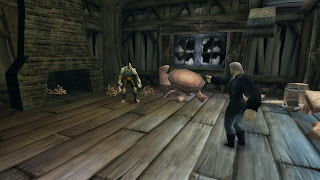 Here is a fan made video that was entered in the Blizzard Machinima Contest. It's documents the Legend of Stalvan pretty well.

Blizzard may have also drawn inspiration for the quest from the controversial novel Lolita by Vladimir Nabokov.

Sadly we're nearing the end of October really soon. I have two more spooky blog posts planned for the rest of the month! Hallows End starts tomorrow, so I wish you all luck with collecting all the goodies from that holiday. As for me, I will be going after the Headless Horseman's mount once more and wearing every stupid mask I can get my hands on! :)