First I wanted to start off by saying, I explored Karazhan Crypts way back in BC. The method I used to get in, of course, no longer works. Even though I'd love to go back there and explore, I wouldn't try to do it again. At that time, me and my boyfriend Pigletoos dueled to get in there. We used the mage's polymorph and with the warrior's spell reflect to basically "sheep" through the bars.

These screenshots are from sometime in late 2008. I kept my UI up in most of them so that the names of the places would show in the screenshots. That's why in most pictures you can still see the black box that was my chat window. I did my best going back to clear up and edit some of these photos, but remember, my graphics card wasn't that great at the time. Here we go... delving into the depths of Karazhan Crypts. 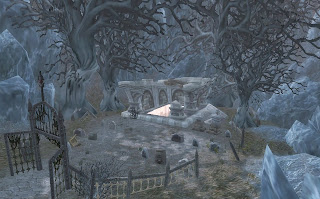 I pressed my face firmly against the bars and peered into the darkness inside. Even though my undead skin was already cold, I could feel the even colder and stale air coming from below. Pigletoos stood behind me, "Are you ready?" he asked; I simply nodded. He stood ready with his shield to deflect the spell I was about to toss at him. With one quick cast, my polymorph was reflected back at me and hit me directly. I was a sheep and I managed to squeeze through the gaps between the bars. I was inside and ready to explore. "Good luck Vel, and be careful." I touched Pigletoos' hand through the bars before I swiftly made my way down into the crypt. 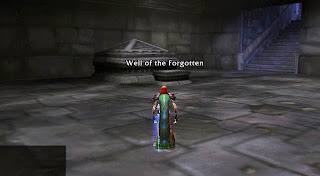 The first place I stumbled upon was the Well of the Forgotten. There was a tomb and a hole in the floor. I looked around cautiously before continuing my journey downward. 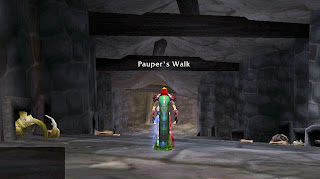 I came upon the Pauper's Walk. Its corridors downward was lined with holes that were filled with bones and a few wrapped up remains. I could hear crunching beneath my feet, but I didn't want to look down. I just kept walking. It felt like I was descending into a nightmare. 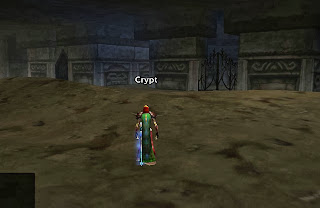 When my feet touched the cold and solid ground, it was a relief. I looked around the vast area before me. It was called Crypt. There were a bunch more empty tombs. I was able to open the gates and walk into them. There was nothing more than a ton of darkness around me. After searching for what felt like eternity for a way out, I found an opening that I passed through to lead me into the next room. 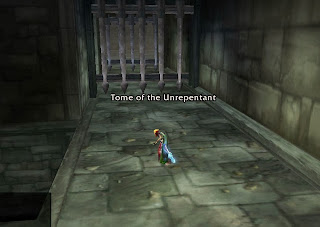 This was called Tome of the Unrepentant. It was nothing more than a stone chamber with metal grating that could be opened and closed. What could this place be used for? I was so confused, but still curious at the same time. I could see water close to the bottom of the stone area. It looked really deep. I walked down a short ramp and peeked into the gap under the stone floor.

The stone was quite mossy and to my horror, I slipped in. Quickly flailing about and gasping for air, I made it to the surface. The area that I has slipped and fell from was too far up for me to reach. I looked up to see nothing but a cold stone ceiling a few feet above me head. Was this the floor to the area I was in before? I noticed these huge chains draping down from parts of the stone and into the water. I had the most uneasy feeling as I realised I would have to swim down and search for a way out. 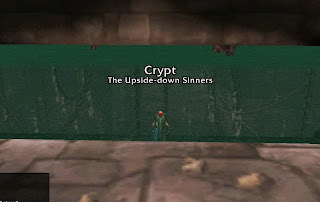 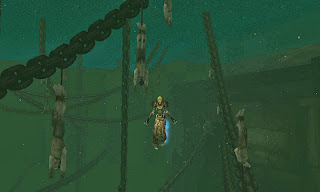 Once my eyes adjusted to being underwater, I was shocked at the horrors I saw. It was called "The Upside-down Sinners". Tons of people were hooked to the chains. Why were they here and who could possibly do such a thing? I had so many questions, but I was so sick to my stomach that I swam to the other side of the room as fast as I could. There I was able to climb out, catch my breath, and compose myself. 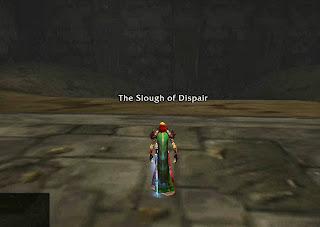 I was on dirt again. This room was called The Slough of Despair. The room was so dark I could hardly see anything in front of me except for a single hole that lead down. I took one quick peak and realized that I had no other choice but to carefully hop down and hope I landed on something soft. 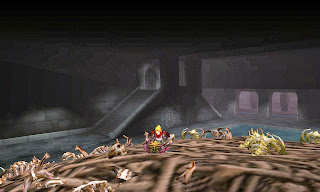 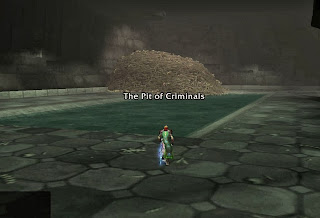 I took a leap and before I knew it I had landed on something... bones. I was now in a place called The Pit of Criminals. It was leaky, dripping, and smelled of death. Bones were stacked as high as the ceiling could go. I looked around and realized from here, I could get back to the crypt area pretty easily. 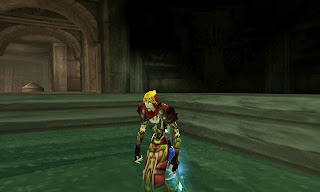 I stood there in the middle of it all. I still wasn't sure what I had seen. I was definitely glad my exploration of it was over, and I didn't really feel the need to go back anytime soon. I was wet and extremely dirty. All I wanted to do was make it back to Pigletoos and tell him about my journey. I took out my Hearthstone, and as I held it in my hand I took one last look around me. Perhaps one day we will learn a little more about this place. Until then, all I have are my memories of the Karazhan Crypts.

Note: If you would like to more of the screenshots from when I visited Karazhan Crypts, you can see them HERE. They are all unedited and untouched!