New patch, new stuff to do - this is the Warcraft cycle. The patch has now been out for over a week, and I've been able to jump in and mess around with the stuff that I was looking forward to. It's all pretty exciting when a new patch comes out with new things. However, it can sometimes get a little messy when those things are mostly just repackaged versions of what we've been doing before.

No, this isn't going to be a complaint post. I honestly have little to gripe about. Let's talk about the intro to the Broken Shore. I love scenarios that make you feel like you're part of what's happening in lore. I didn't think I'd be overcome with emotions, but the minute I set foot on the shores again, I thought back on the Legion intro and all the sacrifices that were made. It really gives the player a sense of wanting to push back the forces and get into the action. I love that! The downside is having to do it over and over on alts. It gets a bit stale. The Broken Shore itself looks alright. I know a lot of people are getting tired of the sickly fel green color, but you have to admit that the Tomb of Sargeras looming over everything looks very intimidating. 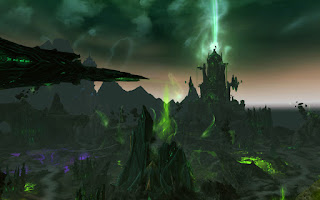 The dailies are also refreshing since they are in a sense new, though trying to get the quests done on my server can be a bit of a challenge. Since 7.2 I've noticed a very heavy Alliance presence on my server. I know we have always been Ally heavy, but this feels like a lot more. Most things are tagged before you even have a chance. Come on Blizzard! I thought we were supposed to be working together to defeat the Legion. I know cross faction tagging isn't usually ideal, but it would be so beneficial there. There is also the issues with random invasions only lasting six hours a day. Regardless at which time they are placed, someone will always be left out. Though it's no longer a requirement for Pathfinder pt. II, I still question why Blizzard didn't just change each invasion to last 24 hrs and rotate them that way. 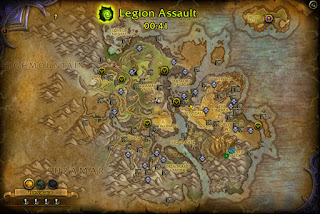 The other day I ran Cathedral of Eternal Night with my little guild. The place was really beautiful and the fights were really fun, especially Mephistroth. If you haven't run that dungeon yet, I highly suggest doing that. I was also excited to dive into the anticipated pet battle dungeon. Sadly this was a bit lackluster, and I'll only be running it until I collect the remaining pets I'm missing. Finally we come to the sets tab! It's my new favorite thing, and I honestly wish Blizzard would have implemented something like this earlier. My only complaint is I wish it had a filter for all sets (greens, blues, epics) for those who love collecting. Maybe someday we will see it get to that point.

As with most things here, this is of course my personal opinion, and you probably shouldn't listen to me or anyone else for that matter. If you neglected your playtime last patch, now is a good time to jump back in. With gear catch up, flying coming soon, and a new raid after that, you'll be able to help fight the Legion in no time. Whatever you decide to do, good luck, and hopefully I'll see you on the Broken Shore!