I know I said on Twitter that I wasn't going to talk about the WoD Alpha drama anymore, but it really has been bothering me. I hear and read about both sides, and I even feel like I'm a part of both. Since this is mainly a post for me to just rant and get everything off my chest, I am disabling comments.

Now, if you're still interested in reading my rant, please continue, but if you don't care to hear my opinion on the WoD alpha drama, then click here for a savage thing!

My first complaint is the amount of time we're having between last tier and the new expansion. Now, I feel like if the game has become boring to you, unsubscribe from it. Personally I wouldn't pay $15 a month for something that I'm not having fun with. Also, there are plenty other games out right now that could use some attention. That being said, I know not everyone wants to play something else. That's great that they are so passionate about WoW! I am currently still subscribed as of now, but I feel that after I get my hunter to 60, there isn't really much else that I want to do. I can only imagine the headache and heartache that someone who really enjoys raiding feels even though SoO is not up to the 9 months DS was up to.. That's the reason Pigletoos quit and unsubscribed for now.

Sure you can argue that there are plenty of other things to do in the game, but remember... not everyone shares the same play styles. I've only set foot in LFR, but I find pet battling fun, and I'm sure someone thinks that's the most boring and lame thing ever put into the game. This is why I don't think it's alright to say, "be quiet and quit whining" or "suck it up" or the even more famous "I doubt they have done everything". We all pay the same monthly fee, so I think it's alright to complain and give constructive criticism. While you may still be having fun gearing up your 5th alt on the Timeless Isle, some of us are over it.

My next concern is the player models. I won't say complaint because I'm not really sure what direction Blizzard is going yet with these. First off, they all look absolutely amazing to me. I love the fact that the Dwarf Female had her scary joker mouth redone. She now looks lovely. The only model that is still bothering me is the Gnome Female. I think the eyes make her look a bit... spazzed? To me, they look strange. That's not what I'm concerned about though... I have the concern of the "same face syndrome" that all the models seem to have. Here are the Warchiefs data-mined so far, plus Thrall. Despite all the Warchief's different skins, they all suffer from pretty much the same face. I believe Thrall's face still looks like it does currently in game, just a bit more updated. I hope these faces are just placeholders for their real ones. Pig has been reassuring me that he thinks they are all using the standard "Garrosh" model face just for now and their true faces will be unveiled later... almost like a surprise! I'm still excited to see Gul'dan!

Now, these are images taken from the AdriaCraft blog that someone on the MMO Champion forums compared to the models we have currently. These are the possible looks the new models will be taking the place of. 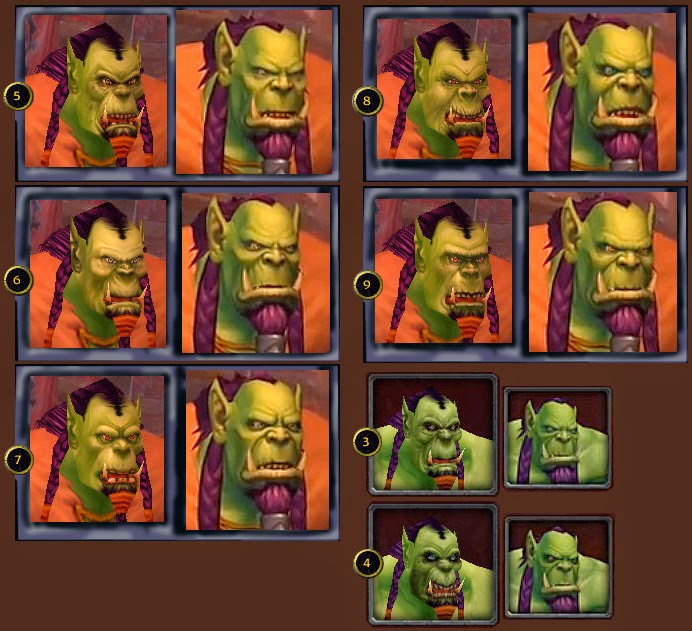 With the exception of a few different lip and eye colors, some wrinkles, freckles, or more shadows, every face looks the same to me. As someone who is extremely excited for the new models, this also worries me. Now I don't think Blizzard will take away our characters unique identities... at least I hope not, but I'm hoping to have a little more variant from each face. I keep telling myself, "don't worry, it's only alpha.", but we all know that's probably silly. I mean... have you actually seen the female Pandaren faces currently in game? They are all the same too.

And finally, let people freak out about the 6.0 patch notes. It happens with every expansion when Blizzard decides to remove, add, take away, put back, move, give it back, feed it to Oondasta, throw it into the Twisting Nether, or whatever they decide to do. People don't like change, but that's just how life is. Pick yourself up, cross your fingers that you get an alpha invite, and start learning again and become the best you can be! But please always remember this... I know I'm trying hard to:


"Please be aware that the patch notes are preliminary and not final. Details may change before retail release and new information will be added for additional features as development continues on the Warlords of Draenor expansion." - The Voice of Blizzard (HAH!)