You all know Velgana by now. She's my main toon, alter ego, and my most favorite WoW character. I am getting close to having a full year played on her alone. What you don't hear me talk about often is my much lesser known characters - my alts! These guys and gals always get leveled and geared up much later in an expansion, but I still try my best. While I don't think they will ever take the place of Velgana (who knows, maybe someday), I still enjoy playing on most of them almost daily. Some are even still in the process of being leveled up.

This may be one of those posts that I update in the future to keep consistent with whatever new characters I may create. Until then, click below to meet my current family! 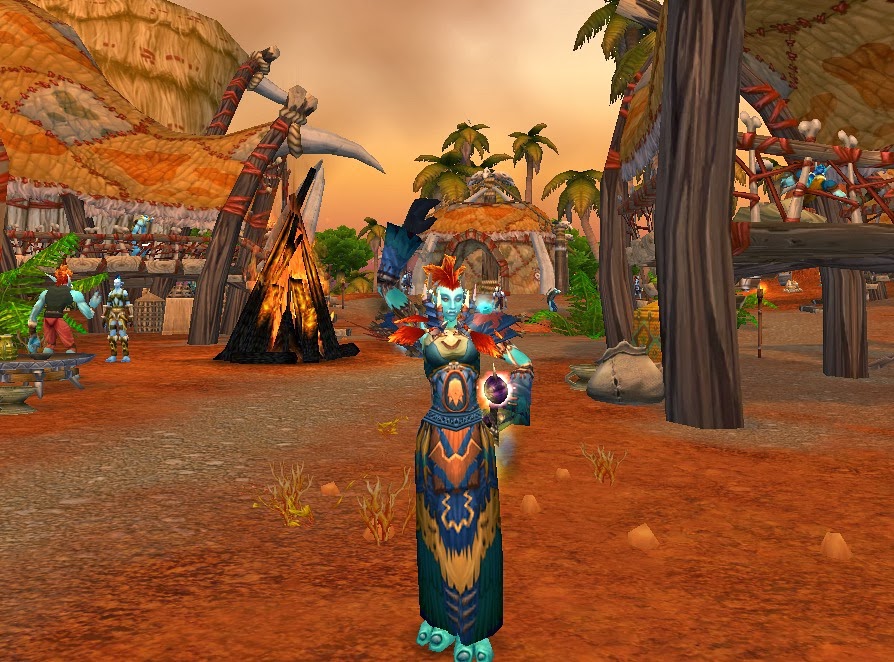 When I first tried out WoW, it was on my boyfriend's account back in 2006. After staring at the character creation screen, I created a Troll priest. I quested a bit and really enjoyed it. It wasn't until months later when I purchased WoW myself that I decided to be an Undead mage instead of a Troll priest. This was the first alt I ever made though! I remember healing Wailing Caverns while running with some friends. To this day, I still don't know why we ran that place so much than I knew it like the back of my hand (maze area!), and groups were shocked that they were missing the actual last boss of the place! Anyway, Eiram will always hold a special place in my heart as does the Troll race. 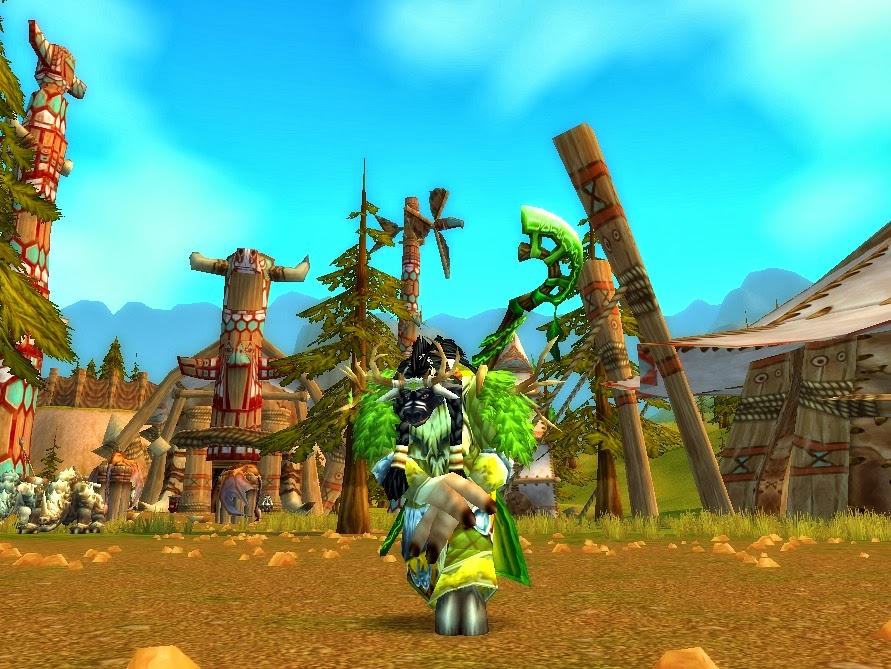 Towards the end of the Burning Crusades, there were rumors and lots of random talk as to what the next expansion would be. At the time, the biggest speculation was that the next expansion would be based around the Emerald Dream and it would be more accessible to Druids. It's so silly to think back on that, but that's when I decided to make my Druid. She was a "just in case" character. I remember the night that I made her. After I leveled a bit, me and my boyfriend went to eat dinner at Huddle House. I ordered steak and fries and sang about her as I ate. Since making her, I've gone from Feral to Boomkin, and I'm never looking back! 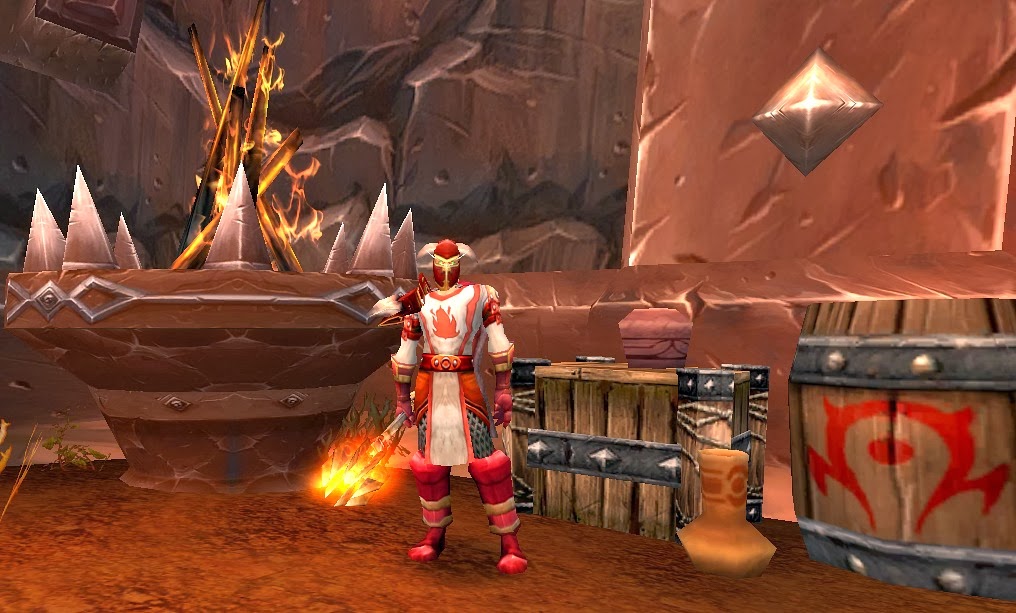 I made this paladin to PvP in the 39 twink bracket. I have the full Scarlet set and other random twink pieces, Lumbering Ogre Axe (I never got the Pendulum of Doom, boo), and even my head piece is enchanted with this although I get no benefit from it anymore. Another funny this is during Wrath of the Lich King, there was a bug that let twinks used the Jormungar Leg Armor on low level green legs. Everyone was doing it, and it was quickly patched - photo here! Now with Heirlooms and the updated world, I feel as though he just isn't what he used to be. So now I stand around, look sexy, and deal with the auction house. I think I will keep him locked forever at level 39. 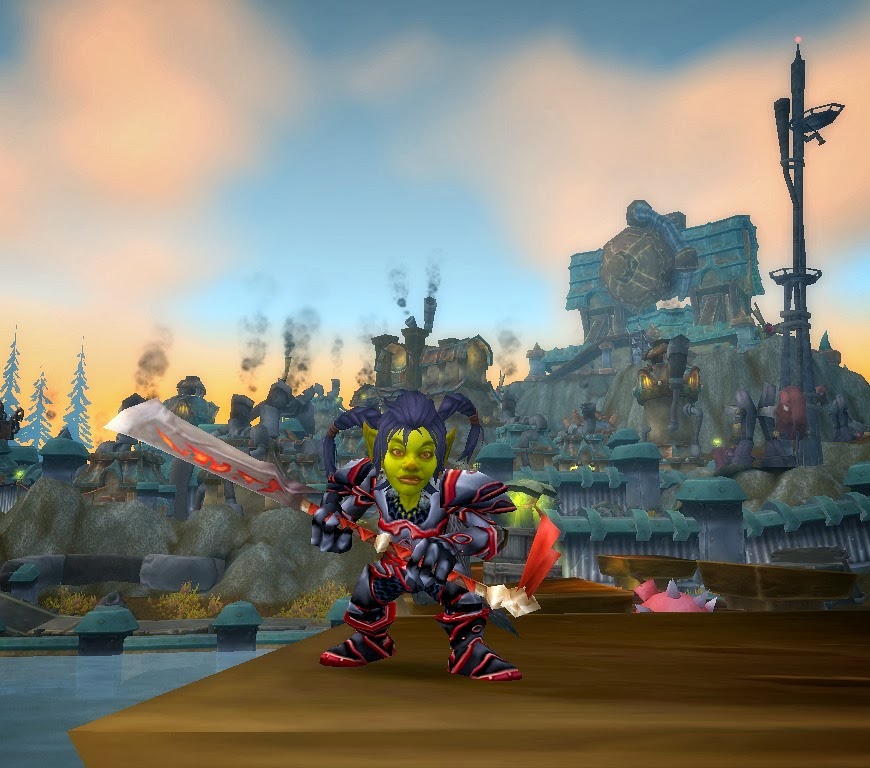 My boyfriend originally wanted to level up some new characters when Cataclysm came out. He decided on a hunter, and I decided on a warrior. We like to play through all the beginning area quest lines since those are usually the best part of making a new character. We actually stuck it out and leveled our little Goblins to max level. I'll be honest, I don't really care for melee too much, but I just can't get rid of her. Plus it's rare to see a Goblin warrior on my server. She's one of a kind! 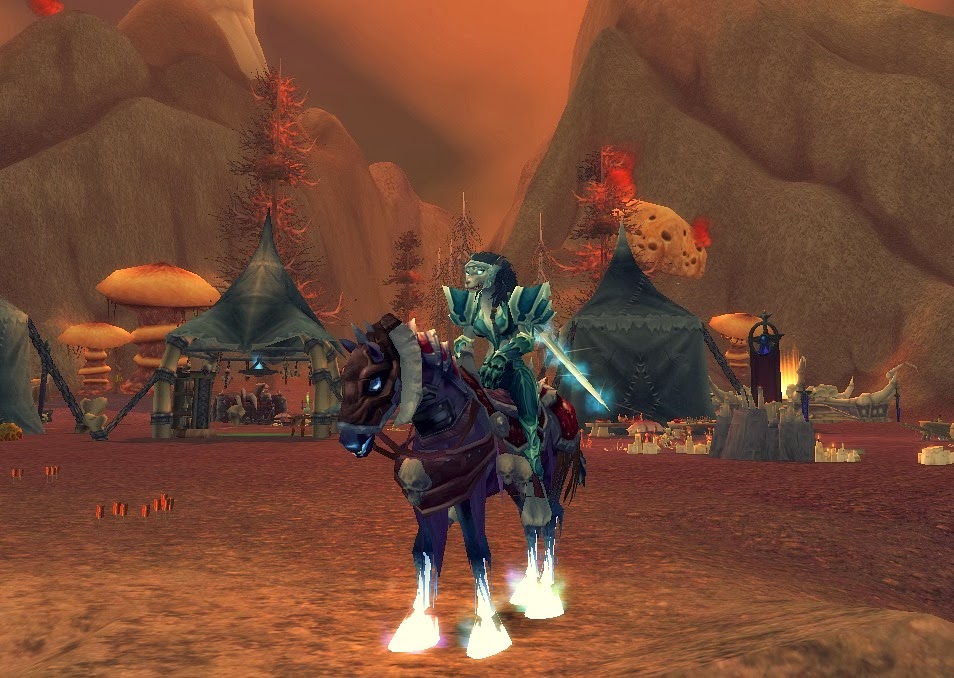 I originally planned to level up an Alliance character, but I didn't really want to commit to starting from the beginning. I made this Death Knight, and decided that I really didn't care for the class that much. Currently she's level 85 and sitting in Stormwind City dealing with my auctions on Ally side. I will probably buckle down and level her up someday. Hah! 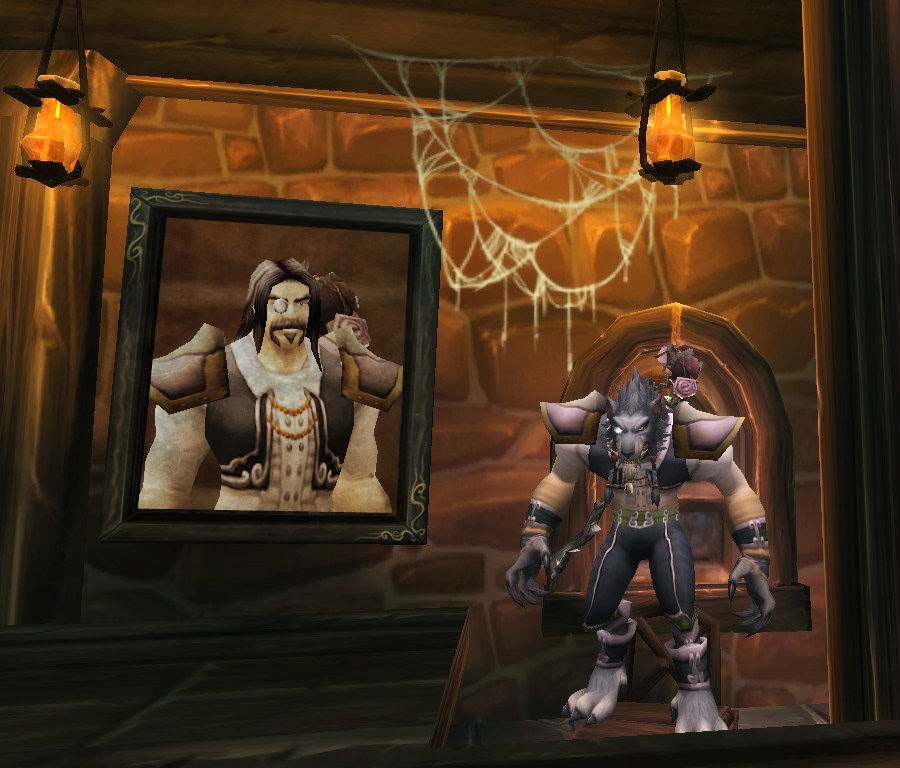 This is my true Alliance character. I don't really care for many of the races on Alliance side, so I was either going to go with Human or Worgen. I decided on Worgen since they look a lot cooler, and I can be a human if I wanted to. Once I hit max level, I plan on starting the Argent Tournament again, and doing all the quests in Alliance zones. So far I'm having a ton of fun leveling him up. 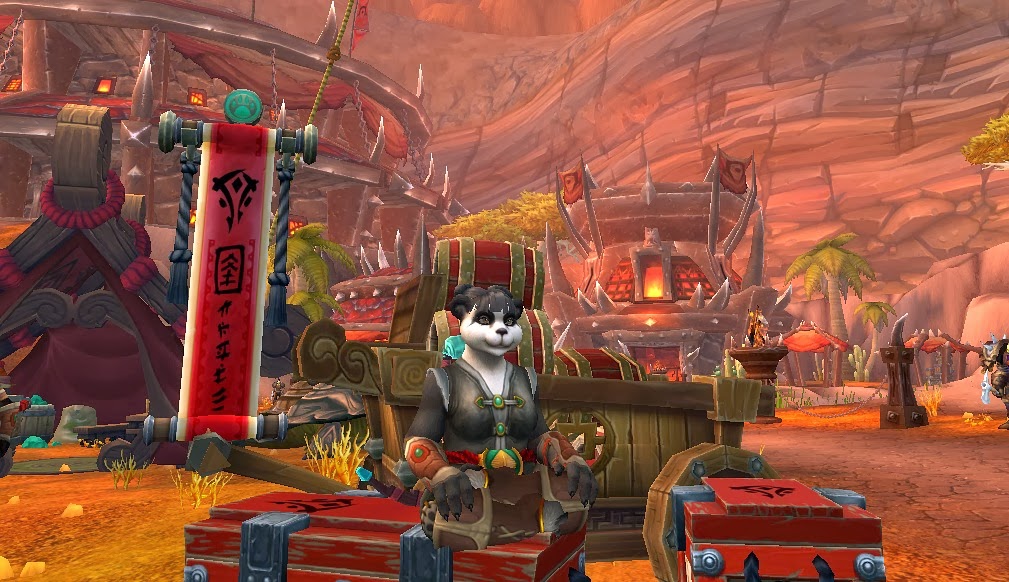 So a few night ago, me and my boyfriend decided to play through the Pandaren starting area. As a lover of collecting stuff, I have no idea why I didn't make a hunter sooner. I took one look at Petopia and starting planning pets I will be taming in the future. I also had the perfect name for her. A hobby of mine is collecting vintage toys and dolls. Peteena is a dog doll from 60s whose name I thought fit really well for a hunter. So, Tamer Peteena was born! You will definitely see me out in the world trying to tame all the pets! 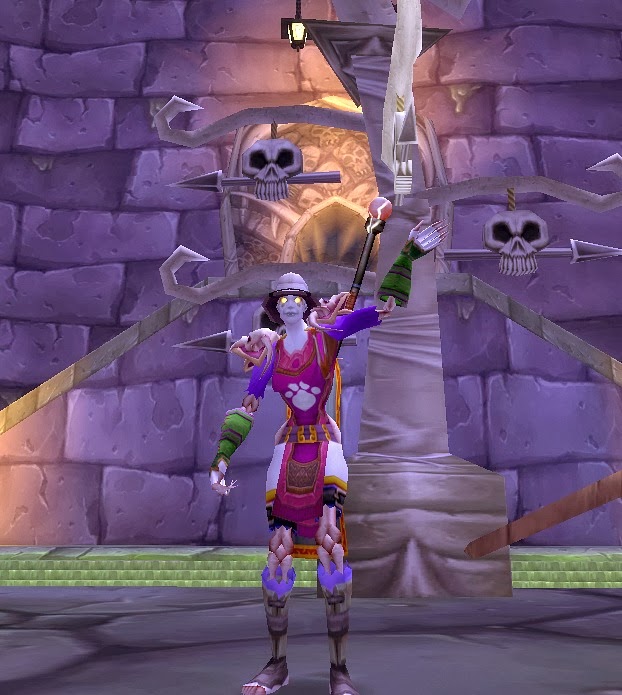 She was made exclusively so I could have a character in the Warcraft Pets guild. I decided on a mage since that's my all time favorite class and of course, Undead since that's one of my favorite races! If you like collecting pets and want to meet some great people, I suggest joining! 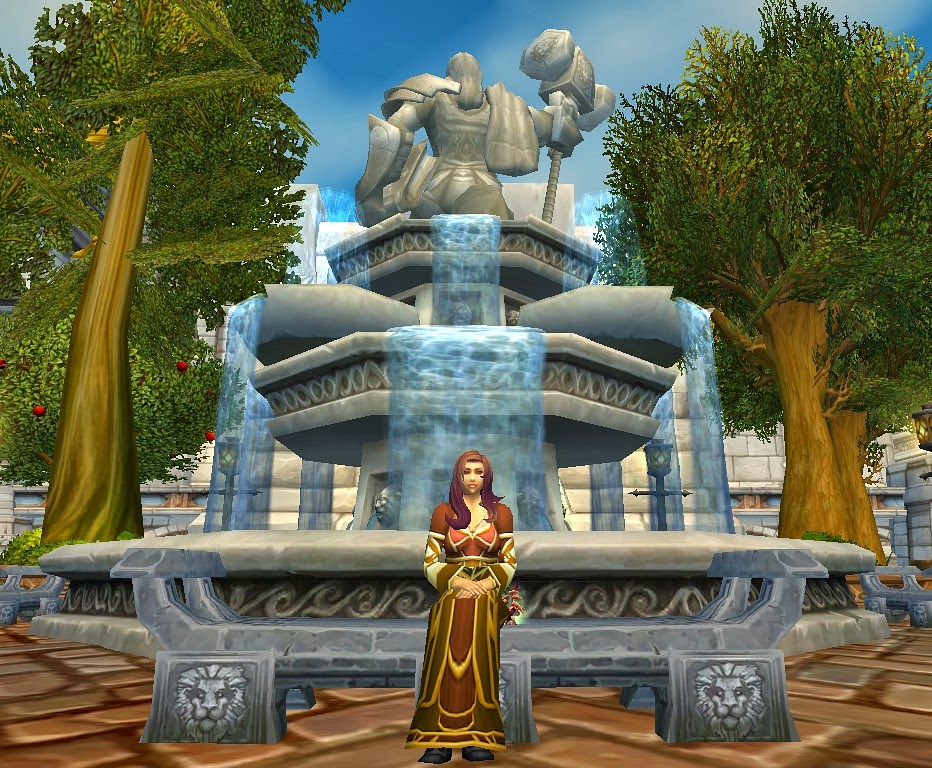 I always wanted to try out an RP server. You always hear about Goldshire and the nasty things, but you never hear about the good things. After monitoring some of the serious RP that went on in Stormwind City and out in the world, a few weeks later I decided to make a mage. My boyfriend also made a mage, and we began questing together. Sadly, we haven't touched these characters in so long. I like to think that they are both living happily in our cozy little house in Ironforge.


I actually had a blast flying all over Azeroth to take these screenshots. Writing their little descriptions also made me think back on why I made these alts in the first place. Sometimes we can get carried away with playing our main characters, raiding, doing dailies, etc., that we tend forget about those lesser loved characters. Maybe you can take a break and visit some of your old alts. You never know when you might fall in love with them all over again!