It's time for a Blog Azeroth topic!

"Consider the nicest, cutest, most sappy, and sweetest quests in the game; nothing sad or depressing, but sweet and light."

I know there are tons of sweet and cute quests out there which involve saving baby bears from trees and helping baby murlocs escape from prison, but one quest stood out above all the rest when I read this topic. It may not be the sweetest quest, but it definitely gave me a chuckle. Journey to Un'goro Crater, land of the dinos before the Isle of Giants. You will find this poor and confused warrior named Maximillian of Northshire and his adorable pony Pimento!

He wants to take you under his wing to become his squire. You agree, but question this poor soul's sanity after you and him set on a quest to slay "dragons" and help damsels in distress.

The quest concludes when you and him (with a lot of help from Pimento) fight off the biggest dragon in the entire land! 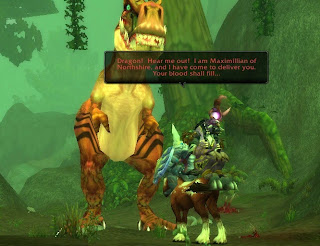 Once Un'goro is safe, you and Maximillian part ways, but he makes sure to reward his squire justly. 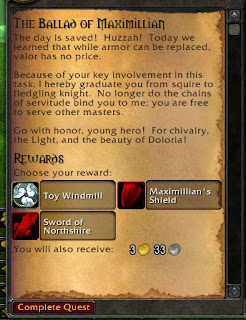 While Maximillian may seem out of place in the Warcraft universe, it's because he pays homage to the Spanish novel The Ingenious Gentleman Don Quixote of La Mancha (more commonly known as just Don Quixote).


"Go with honor, young hero! For chivalry, the Light, and the beauty of Doloria!"