I am a lore nut! Some of this is the truth and the rest is just speculation about upcoming things. I have no idea how this all brewed up in my brain from one little npc then onto reading hours of lore. I link to a lot of stuff, so please bare with me. I hope your brain gets to thinking just as much as mine does. I'm calling this...


The Verdantis Effect
As any mini pet collector would do, I started off killing Nalash Verdantis every time I would see him up. I never thought twice about him or his name. One day, I was flying through Feralas when I came across a river named the Verdantis River. This stuck out in my mind because I had been killing a guy with a similar name for quite some time now. My brain started thinking and it basically led to a whole world of speculation. 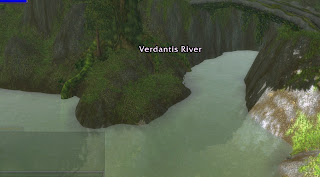 So we know the Jinyu are basically some mutated murlocs. Legend claims that before the Sundering, all rivers flowed to Pandaria. Even though murlocs usually live by the coasts, could some have used this river, traveling back and forth and over time becoming some of the Jinyu we see in Pandaria today? If that's the case, did those murlocs use the name "Verdantis" (assuming there is more than one Jinyu using that name, we just don't see them) from the river in which they came? Perhaps they traveled to Kalimdor more than we'd like to think, but stopped when they saw a future for Feralas that was of death and destruction?

Feralas also contains Dire Maul which used to be the Night Elf City is Eldre'Thalas. You almost forget that inside there is a secretive Shen'dralar faction which is made up of Highborne. Everywhere outside of DM you can see a less glowing and shimmering water than the one you see in Pandaria. 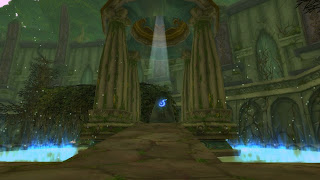 The speculation is that the water in the Vale of Eternal Blossoms is water from the Well of Eternity, but could the water outside of DM be the same? If so, then I can see more of a connection to the Jinyu and the Verdantis River... and perhaps even with the Highborne.

If you did most of the quests in the Karasang Wilds, you will remember the line with Sunwalker Dezco and his wife Leza Dawnchaser. Their entire clan traveled to Pandaria to follow her "visions" seeking "the light". I think "the light" her visions were referring to is the water from the Vale. This water has now also appeared on the Isle of Thunder where the Sunreavers have taken camp at the Dawnseeker Promontory. It was a murky and swampy looking well, but it has cleaned up and now contains the glowy water. 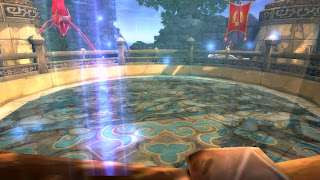 With all the destruction that Garrosh will be doing in the Vale in 5.3, I believe it will corrupt the water and land therefore making it very susceptible to someone who was thought to be dead - Y'Shaarj. We know that the Sha are basically pieces of him scattered throughout Pandaria. There are 6 of the 7. I believe the 7th is located under Throne of Thunder where the Titan boss Ra-Den is located. Going by Blizzard's policy with death and lore, Ra-Den will be presumed "dead" in 5.3... which would mean the last piece of Y'Shaarj he was guarding would be guarded no more. Only a Titan could have held his power back, we know this from previous Old Gods and raids, now it's too late. Upon Ra-Den's death he says:

"Wait! I am... I am not your enemy. You are powerful, more powerful than he was, even... perhaps you are right... Perhaps there is still hope. But there is a yawning chasm of darkness beneath you mortals, vast, endless, and all consuming... I do not believe that you can correct this doomed course... But you have earned the right to try. Farewell."

I believe Y'Shaarj will use Garrosh as a vessel, basically putting himself together again. With the Vale being weakened, he will try to take over Pandaria and attempt force the rest of Azeroth to bow to him. So my thoughts on the last boss of the expansion will not be the death of Garrosh, but the death of an Old God. :)