No luck again in LFR this week. I managed to walk away with 1 Sigil of wisdom and a pocket full of gold coins. I want to replace my nasty Firescribe Dagger. It's terrible that my weapon is my worst piece of gear. I am also saving up my valor for one of the new Dominance Offensive rings; Dominator's Band. It's beautiful and will replace the one I got from the Headless Horseman this year.

I have been meeting nice people left and right lately though. I believe the Sha of Happiness is to blame for all the kindness spreading around. The day patch 5.1 hit I ran out to collect some of the new mini pets. By the time I got to the Lofty Libram, I snagged a common quality one just as a Night Elf named Tanra was coming around to camp one. Instead of the normal /rude or /spit I expected to get, they gave me a cheer and a pat for my new companion. It was a pleasant surprise and I definitely thank them for that.

A few days later I met a wonderful Horde player named Rockyoysterz who is also a mini pet collector (#2 on skywall!). He is all around an extremely nice guy!

Today in LFR I held a conversation with nice hunter from another realm. I wish I remembered his name. I definitely know it started with an "H". We got to talking because he liked the title I was using. I wish them good luck with their future relic hunting!

Other than that, I've been working on replacing my low quality pets with the rare ones. I also have been running ZG for a chance at the raptor and the panther mounts. And lastly, today I lucked out and never have to step a foot into Molten Core again... 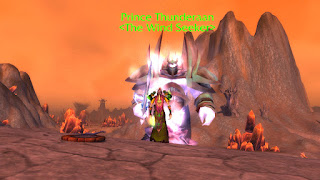